Zook is a Bambazooker who is a Life Skylander from Skylanders: Spyro's Adventure.

Zook is the cheeriest walking bamboo plant you will ever meet. He lives life to the fullest and wants to explore every last one of Skylands' many islands.[1]

Zook hails from a strange and unusual species called Bambazookers, who once lived their entire lives standing in place... until Zook discovered they could walk simply by stepping out of the mud. After that, he became a wandering hero, using his hand-carved bamboo tube as a bazooka that fires special explosive thorns. Campfire songs were even written about him. Now, Zook spends his time as a Skylander, figuring he can be an even bigger hero... and have even more songs written about him.

Zook is something of a folk hero among the Bambazooker forest folk. After centuries of standing still, Zook decided not to be a stick in the mud anymore. He simply lifted his leg and stepped forward. He then wandered the woods spreading the word - Bambazookers can move! But nobody took much notice. The first time an outsider saw a Bambazooker was when Zook saved an elven mapping expedition. The elves were watching Zook and placing bets on the purpose of his bamboo tube (some said it was a telescope, while others mantained it was a didgeridoo). The elves were caught unawares when a mighty mountain troll stomped menacingly towards them.

Suddenly, Zook brought all betting to a close when he lifted the great tube to his shoulder. Out shot a shower of exploding thorns that sent the troll into a speedy retreat. 'Ahhhh, a bazooka!' the elves exclaimed. To this day, no other bambazooker has ever taken a single step. So, as the only mobile Bambazooker in history, Zook has a special place in the Skylanders squad.[2]

At the Cloudless Desert, Zook and Cynder were enjoying the sunrays, although the Bambazooker was the only one who was having fun. As soon as Hex arrived to inform the two Skylanders of Master Eon requesting their presence, a freak rainstorm brewed, causing the sand dunes to turn into quicksand. Without a moment's hesitation, Zook assisted Cynder and Hex in saving the beachgoers from sinking underground. Afterwards they arrived in Eon's citadel, where they learn that there had been multiple reports of unusual weather conditions throughout Skylands. Clues point to the Isle of the Dead, where they had received a call for help from one of the undead inhabitants.

Master Eon then assigned Cynder, Zook, and Hex to venture to the Isle of the Dead, where they believe they'll find the cause of the storms, the Undead fragment to the Mask of Power, and answer the call for help by the undead inhabitants. Because Zook was a Life Skylander, he was granted a protection spell by Master Eon to withstand the island's dark power. During the adventure, Zook served as the only lighthearted individual of the three Skylanders, as both Cynder and Hex are gloomy characters of the Undead.

Upon encountering the weather wizard, Hurrikazam, the Skylanders infiltrated the wizard's citadel where they learn that Hurrikazam was stealing the undead inhabitants to drain them of their undeadliness using the Undead Energy Extractor. However the real culprit was Kaos himself, who was forcing Hurrikazam to commit evil deeds. During the battle, Zook was temporarily frozen in a block of ice caused by Hurrikazam's weather machine, but managed to break himself free. However the Bambazooker and Cynder were trapped by Hex's bone fortress, and the elven sorceress proclaimed herself to be joining Kaos' side in helping him gain enough undead power to destroy Skylands. An eager Kaos began the draining procedure, but the Undead Energy Extractor began to overload due to the amount of power from Hex. It was soon realized that Hex never betrayed the Skylanders and planned on overloading the machine all along to destroy it.

The machine soon exploded, and after a brief moment of seeing Hex's true form, the Skylanders return their attention to Kaos. Zook and Hex took on Kaos' remaining forces, while Cynder went after Kaos and drove him away with the help of a friendly Stump Demon named Dogwood. With Kaos defeated, the Skylanders celebrated their victory back in Ghost Town, where the undead returned to their normal forms. Hurrikazam apologized for his actions and announced to redeem himself by bringing storm clouds suitable for the Undead. As a token of his gratitude, the weather wizard handed the Skylanders an Amazing, Fantastic, Incredible, Suprising, Unfathomable, All-Coloured Rose seed, the Undead segment to the Mask of Power.

Upon returning to the Eternal Archive, Zook, Cynder and Hex were given the horrible news from Spyro that Squirmgrub kidnapped Master Eon and stole five of the pieces to the Mask of Power.

Zook can fire explosive thorns from his bamboo tube, which not only serves as a bazooka, but can be used as a a dijiridoo, a telescope, and other things. He can also summon a barricade of various plants or fungus to protect himself.

Gain a 20% Damage bonus while in the Radiant Isles. The scroll for this upgrade can be found in Aurora Peak. 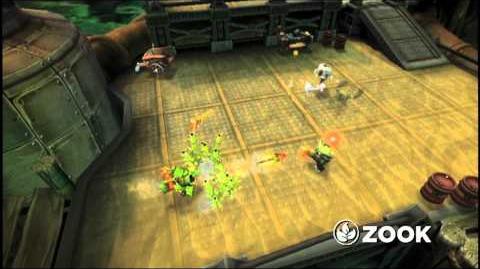 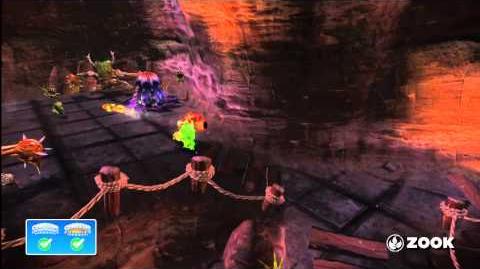