Zoo Lou is a bear shaman who is one of the Life Core Skylanders that was released alongside Skylanders: Swap Force.

A wild and wooly warrior, Zoo Lou doesn't suffer fools gladly. He also is most likely to talk to animals, plants, and sometimes a pebble or two.[1]

Descended from a long line of shamans, Zoo Lou traveled far and wide to the Seven Strange Strongholds – ancient, mysterious sites of great wonder in Skylands – where he studied the wisdom and fighting styles of the Seven Strange Mages. After many years of traveling and studying, Zoo Lou returned to find an army of trolls had invaded his sacred homeland to mine its natural magic resources. Zoo Lou’s warrior heart burned with fury. And having now mastered the enchanted art of communicating with nature and summoning animals, he unleashed his great mojo – attacking the trolls and single handedly freeing his lands once again. It was this heroic feat that caught the eye of Double Trouble, who then brought Zoo Lou to Master Eon and the Skylanders.

A bear shaman with a warrior's heart, Zoo Lou spent many years studying the wisdom of the Seven Strange Mages, gaining the ability to summon mystical animals to his side. When his studies were complete, he returned home, only to find it had been invaded by trolls. Zoo Lou flew into a rage, put his newly-acquired skills into action, and the entire troll army had to grin and 'bear' the beating of their lives.[2] Double Trouble witnessed Zoo Lou's heroic deed and brought the shaman to Master Eon, who proceeded to make Zoo Lou a Skylander.

Zoo Lou and Lightning Rod were assigned by Spyro to search Fantasm Forest for Master Eon, who was kidnapped by Squirmgrub.

Improve the pig and unleash the thrashing terror upon enemies!
Strengthen the bond with the wolf and train it to dig up items and attack enemies! 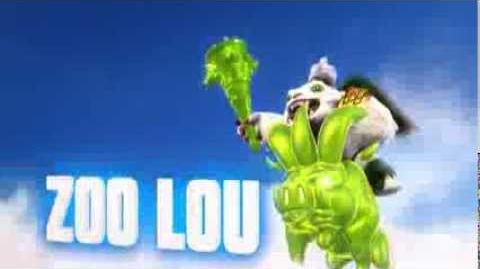