Zap is a water dragon Skylander who first appeared in Skylanders: Spyro's Adventure.

Zap was originally a slime character called Cyclops Snail. Cyclops Snail, which Michael Graham described as "this little blue water slug that zipped around, left a little pool of sludge behind him, and he would scream and shoot electricity. He was just so weird — really fun, but totally bizarre. After some feedback, we changed him from blue to purple, but then it was 'you can’t have two purple characters, because Spyro is purple.' Then we got an early version of what Cyclops Snail’s toy might look like, and we thought, 'Oh my gosh, these don’t look at all detailed, not in the way that we want them to be.’ He was revised again, made of oil and now called Tarclops, and that was the final straw. The character evolved so much, by the end, character designer I-Wei Huang at Toys For Bob felt that everything he liked about the character was gone, so we thought, let’s just scrap it — we’ve got to go in a different direction."

But in a way, you’ve already played as Cyclops Snail; you know him as Zap. "We reimagined the character," says Graham. "Same moves, actually; he plays exactly the same way as Cyclops Snail did. And even Zap went through a little evolution. His original concept didn’t have his scuba tanks, and we shortened his snout quite a bit."[1]

Zap is a friendly and mischevious water dragon, being revered by most of the sea creatures of Skylands who see him as a true dedicated guardian of both the seas and Skylands. He enjoys racing, being able to outstrip almost any opponent, and excels at everything he turns his claws to. Naturally curious and super-competitive, Zap is also a bit of a prankster, loving to shock his fellow Skylanders whenever he gets a chance.[2] However he can be too curious for his own good and has a nose (or snout) for trouble, which can lead him and his fellow Skylanders into dangerous situations.[3]

Zap was born into the royal family of water dragons, but a riptide washed him to a distant sea, where he was raised by electric eels. Growing up, he excelled in everything and even created a special gold harness that allows him to carry an endless electrical charge and shock things at a great distance. Zap also proved to be a gifted racer, outstripping any opponent... with the possible exception of the dolphins. With them, it became a good natured challenge to see who could keep up with Zap. But an electric current in his wake often reminded them who they were dealing with. Despite his mischievous streak, Zap grew to be a true protector of the seas and Skylands.

Born into a royal family of water dragons, Zap was well known at court as a show-off swimmer and all-round mischief maker. But one afternoon young prince Zap found himself quite literally in deep water. A riptide had sucked him out into open ocean and beyond, to faraway shores. Soon, Zap found himself surrounded by slippery and shocking. A school of electricl eels was swimming around him, spitting out sparks and sizzles. Zap held out a wet foot to say 'hello' when... YEEOWWW! Well, his mother had warned him electricity and water don't mix. The electric eels felt sorry for the unplugged youngster and decided to raise Zap as one of their own. To fit in, he even built himself an electric harness with an endless charge. Now, Zap can hurl a white-hot electric bolt length of ten sheep fields.

Zap continued as a champ in the water and often left dolphins buzzing in his electrical wake. News of his swimming exploits soon reached the ears of Master Eon, who immediately signed him up.[4]

Zap and Wham-Shell were called by Master Eon to assist Gill Grunt when the Gillman was about to be eaten by a rampaging Cloud Kraken that was attacking Deep Water Wasteland. Zap's electric bolt saved Gill Grunt from the clutches of the Cloud Kraken, who then turned its blind fury upon a pirate ship called the Fearsome Fang and its crew. The ship's captain, Grimslobber, mysteriously scared off the Cloud Kraken without having to do a thing, confusing Gill Grunt, Zap, and Wham-Shell as the pirates praised their captain for his bravery.

Although Gill Grunt didn't want any trouble with Grimslobber and his band of pirates, Zap's curiousity about the accidental mentioning of treasure by one of the pirates prompted the seemingly friendly Grimslobber to surround the Water Skylanders with his crew and attack them. Gill Grunt, Zap, and Wham-Shell narrowly escaped the Fearsome Fang crew and dove into the safety of the sea, but not before Zap left a painful parting gift for Grimslobber as payback for calling Gill Grunt names during their encounter.

The Water Skylanders then hear from Spyro that Kaos was after the Water Fragment so that he could reassamble the Mask of Power in order to use it to destroy the Core of Light. Determined to beat Kaos to the fragment, Gill Grunt quickly lead Zap and Wham-Shell to the Kingdom of the Merpeople, knowing that the merfolk, who have swam the waters for thousands of years, would know the location of the fragment. The Skylanders discovered the kingdom deserted, with only the elderly, children, King Scalebeard, Prince Aquan, and Princess Finella still within the kingdom's barrier. Suddenly, Prince Aquan and Princess Finella fell under a strange trance and swam out of the kingdom along with several other merfolk with the Skylanders in hot pursuit to see where they were going.

With the help of Zap's speed, the Water Skylanders were able to keep up with the merfolk, avoiding a swarm of electro-jellies along the way. During the chase, Wham-Shell mysteriously had fallen under a spell and turned on both Gill Grunt and Zap, capturing Zap (after confusing the water dragon with his starfish bullets) and taking him into a cave where the hypnotized merfolk went into.

A hypnotized Gill Grunt soon discovered that Zap was imprisoned in a cage, covered in a blanket of Wham-Shell's starfish that held him down forcefully. Distraught at the sight of seeing his friend under the spell as well, Zap revealed that Captain Grimslobber couldn't control him with the use of the Fish Master's Crown, since the water dragon wasn't born beneath the sea like the others. He strongly encouraged Gill Grunt to break free of the crown's curse, reminding the Gillman of their mission to find the Water Fragment and stop Kaos, and that Master Eon, Spyro, and even Zap himself believes in Gill Grunt and that they would succeed. Thanks to this, Gill Grunt was able to free himself from the influence of the Fish Master's Crown, causing Grimslobber to lose control over a portion of the merpeople and Wham-Shell when trying to concentrate on putting Gill Grunt back under his control. During the confusion, Grimslobber lost his hold on the Crown after Wham-Shell released the gem-eels, and it shattered into two pieces, fully freeing the merfolk. As the pirate captain made a hasty retreat, Zap freed himself from the now-dormant starfish and followed after Gill Grunt back onto the deck of the Fearsome Fang along with Wham-Shell. With the help of the merfolk, and even Spyro, the Water Skylanders bested Grimslobber and his pirate crew.

Captain Grimslobber pulled out a pistol and attempted to kill Gill Grunt, when the captain was suddenly knocked overboard and eaten alive by the Cloud Kraken. Kaos then revealed his presence, having recovered the pieces of the broken Fish Master's Crown that supposedly contained the Water fragment. After taunting the Skylanders by dropping fish on them, the evil Portal Master made his leave but not before sinking the Fearsome Fang, causing Spyro, Gill Grunt, Zap, and Wham-Shell to quickly escape off of Grimslobber's sinking ship via portal.

Back at the Eternal Archives, it seemed that the Skylanders had failed their mission to retrieve the Water fragment, when Gill Grunt checked Grimslobber's satchel he brought back with him and held a dirty rag the captain had used to wrap the Fish Master's Crown. The rag soon revealed itself to be the Water Fragment, making the Skylanders realize that Kaos had stolen nothing more than a worthless broken crown. Knowing that Kaos would be after the next fragment to the Mask of Power, the Skylanders would be ready for him.

Zap was among the Skylanders in Wash Buckler's team that helped defend the Skylanders Academy from any potential forces. They eventually took part in fighting against Kaos' armada when the evil Portal Master came to display his show of power in his latest plan.

Zap treats the school of electric eels who adopted him as his family. To better fit in, the water dragon constructed an electric harness that carries an endless charge.

Zap has a long running feud with the dolphins, due to the fact that he regularly shocks them by accident when they ride the waves together, and Zap usually takes offense at the dolphins saying the shocks are no accident... and sometimes they're right. When they race together, the dolphins also have long insisted that Zap uses his power to electrify the water to his advantage. This isn't actually true... at least when he's racing.

Gill Grunt is Zap's fellow Skylander and friend. When Grimslobber noticed the Skylanders and called Gill Grunt names, Zap was quick to defend his Gillman companion and made sure that Grimslobber paid for it.

Using his special golden harness he created as a child to mimic the electrifying power of his adopted parents, Zap can breathe bursts of electricity and spew electrical surges of water at his enemies. He can also leave a trail of slimey water behind him to slow down (and when hit by a spark, electrify) foes. Once upgraded enough, he can summon and ride a wave, if you do not travel with it then the wave goes off by itself, but still damages foes.

Gain a 20% Damage bonus while in the Radiant Isles. The scroll for this upgrade can be found in Icelight. 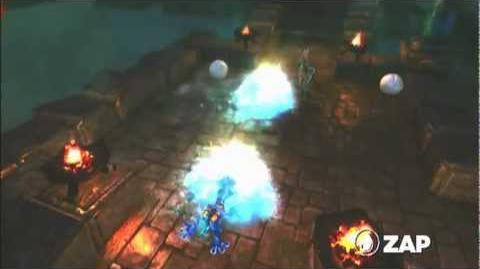 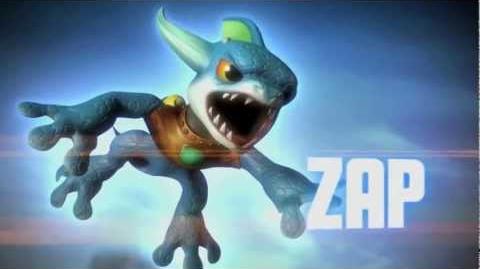