Possibly the most reckless of all the Skylanders, Wrecking Ball rolls into danger without thought for his own personal safety. This lively larva smashes anything in his path (often) by accident, and is always hungry, even when he's just eaten![1] In some media, he possesses dog-like qualities.

Once upon a time, Wrecking Ball was nothing more than a common or garden grub. His adventure began when he became a speciality ingredient in a wizard's magical stew. After being chucked into the cooking concoction, a curious occurence took place. The hungry little grub worm took a sip, and then a gulp, and ended up devouring the whole lot. When the wizard came in to check on his cauldron, instead of his tasty stew he found one enormous grub who had grown to over twenty times his original size. And as Wrecking Ball was still a little peckish, he popped the wizard in his mouth too - only to spit him straight back out again (even a grub's standard's, the wizard tasted like a warthog!). The story soon spread, raising smiles across the Skylands world. Soon the plucky grub bounced into Master Eon, who evidently felt that the Skylanders could do with a serious stomach among their ranks.[2]

Wrecking Ball was assigned with Countdown and Flameslinger to accompany Stump Smash to the Giggling Forest to investigate why the trees had stopped giggling. There, they discover that several of the living trees and Kaos' trolls were turned to stone by an unknown force, which soon revealed itself to be an angry Bone Dragon. During the attack, Flameslinger's bow was turned to stone by the Dragon's petrifying breath and Flynn's hot air balloon was petrified as well. The beast cornered the Skylanders, but Wrecking Ball quickly expelled a Power Belch at the Bone Dragon to drive it away, allowing the Skylanders to escape with a partially petrified Glumshanks.

Upon learning more about the Bone Dragon at the Eternal Archives, Wrecking Ball once again went with Stump Smash and Countdown to Troll Bastion to attack the fort and find Kaos. They fought against many trolls, eventually coming into contact with General Disaster. Whe the troll general readied two dozen missiles to fire at Wrecking Ball, the grub worm simply lashed out his tongue and swallowed General Disaster whole before he could fire his weapons. The Skylanders found the petrified forms of Kaos and Master Eon, and Wrecking Ball cried out to Stump Smash in alarm when he saw the ent was about to smash Kaos's statue to pieces as retribution for Eon's petrification, but reconsidered it. With the help of Wrecking Ball's gassy indigestion from eating General Disaster, the Skylanders were able to escape the Troll Bastion on Flynn's balloon.

Back in the Giggling Forest, Wrecking Ball, Stump Smash and Countdown discovered the other Skylanders had been petrified by the rampaging Bone Dragon. They were able to bring down the beast down and calm him down, and the Bone Dragon restored all those petrified. Kaos however immediately began attacking the Skylanders upon being unpetrified, intending to capture the Bone Dragon for the Life segment to the Mask of Power. He was stopped and driven away by Master Eon and his spells, allowing the Skylanders to secure victory.

After being banished from Skylands along with the other Skylanders, being a frozen statue was a living nightmare for Wrecking Ball. This lively, giant blue grub is never content unless he's smashing things around him (though never on purpose). His thoughts were a mix between food and how to unleash his rapidly building energy.[3]

Gain a 20% Health bonus while in the Radiant Isles. The scroll for this upgrade can be found in Aurora Peak. 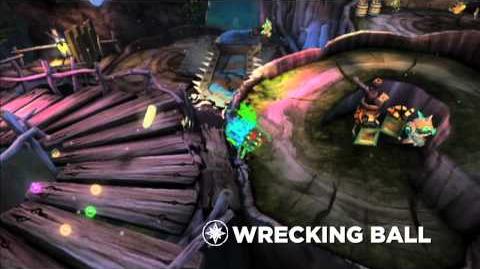 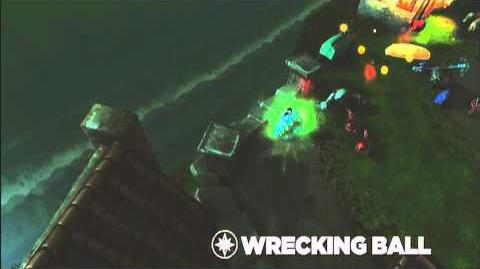 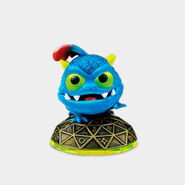 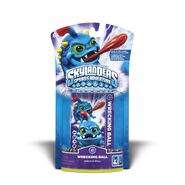 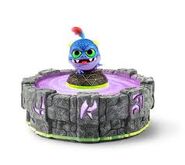 Wrecking Ball in toy form on the Portal of Power. 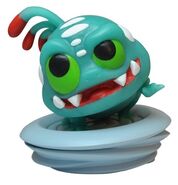 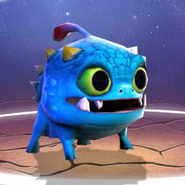 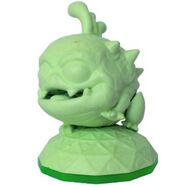 Glow in the Dark Wrecking Ball 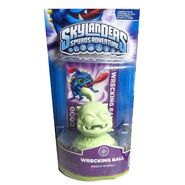 Glow in the Dark Wrecking Ball in a box

Wrecking Ball in a triple pack with Stealth Elf and Sonic Boom. 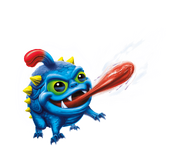 Wrecking Ball Transparent Render
Add a photo to this gallery 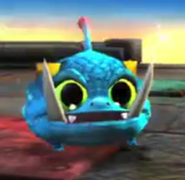 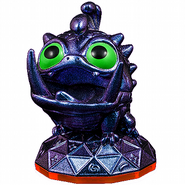 Metallic Wrecking Ball in a box 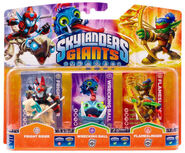 Series 2 Wrecking Ball in a triple pack with Fright Rider and Series 2 Flameslinger. 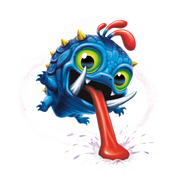 Wrecking Ball Transparent Render
Add a photo to this gallery

Retrieved from "https://skylanders.fandom.com/wiki/Wrecking_Ball?oldid=112185"
Community content is available under CC-BY-SA unless otherwise noted.