Wolfgang is a werewolf guitarist who is one of the Undead playable villains in Skylanders: Trap Team. He is part of a group of notorious villains called the Doom Raiders.

In Skylanders: SuperChargers, he appears in races unlocked by the Sky Trophy, in which he can be unlocked as a playable racer. Later, in Skylanders: Imaginators, he agrees to become a Sensei and teach Imaginators of the Bowslinger Class.

Wolfgang takes joy in terrorizing civilians with his ferocity and evil music. When irritated, he won't hesitate in challenging the authority of those stronger than him. He has a short fuse, but seems to care for his fellow Doom Raiders, referring to them at one point as his "pack" when few of them were captured by the Skylanders. Despite his aggressive behavior, he is said to be optimistic of being rewarded for his music even when people don't appreciate the cacophony and flee in terror.[2] He is a werewolf that can make even other werewolves run in fear. [3]

His wish to be recognized as a musician was the tipping point for him to turn a new leaf. After his rehabilitation, Wolfgang is still somewhat agitated and aggressive in battle, but now towards those in the side of evil.

Wolfgang wasn’t always a werewolf. He was once a handsome, brilliant musician set to marry a beautiful princess. Before the wedding, he planned to unveil his ultimate symphony to the greatest music aficionados in Skylands, convinced they would love it and instantly hail him as the best composer of all time. But they didn’t. They hated it – and even worse, it actually physically hurt when heard. Turns out Wolfgang had unintentionally discovered the musical note for pain. Being shunned like this drove Wolfgang utterly and completely mad, physically transforming him into the werewolf he is today. With the princess no longer wanting to marry him, he turned to a life of crime, terrorizing the royal subjects and using his evil music as a weapon. The Golden Queen took note of this and realized that Wolfgang could make a powerful ally, if she could control his rage and keep him in line. And that’s a pretty big "if!". After becoming part of the Doom Raiders, Wolfgang led a group of Moon Goons on an attempt to curse Chopscotch's entire town during an evil concert. They were defeated by Chopscotch, who once looked up to Wolfgang as her favorite musical idol.

Wolfgang had been on the run and managed to evade the Trap Masters across Skylands. He is the leader of the group of Trolls that were sent by Kaos to threaten the Mabu mining expedition and steal their Radiance Crystals. When the Skylanders, Wash Buckler, Pop Fizz, and Stealth Elf were battling the trolls to protect the Mabu and the Radiance, Wolfgang arrived on the battleground to deal with the 'party crashers' personally. His presence was enough to instill nervousness into the Skylanders who weren't prepared to take on a troll army and a Doom Raider, but they stood firm and prepared themselves for a tough battle. Before Wolfgang could begin his attack on the Skylanders, he became distracted by a Traptanium arrow that was shot into his back, fired by the Trap Master, Snap Shot.

Wolfgang then ordered the trolls to deal with the Trap Masters, but was confronted by Snap Shot who overpowered the werewolf and hurled him into the air towards Wallop. The Earth Trap Master proceeded to knock Wolfgang unconscious with a single swing of his two hammers, and the werewolf was afterwards hauled off to Cloudcracker Prison.

Wolfgang and his fellow Doom Raiders were freed from Cloudcracker Prison by the evil Portal Master, Kaos, who sought to ally himself with the villains in completing his latest plan to rule Skylands. Like the other Doom Raiders, the red werewolf was doubtful of Kaos's "protection" (as The Gulper was captured by the Skylanders shortly after being freed) and was more willing to follow orders of his leader, the Golden Queen. As more members of the Doom Raiders became captured by the Skylanders, Wolfgang didn't hesitate to express his irritation about the growing issue, even to the point of challenging the authority of the Golden Queen. Eventually, the Doom Raiders overthrew Kaos and obtained his troll butler, Glumshanks.

When a slice of rotten cheese was needed to power the Doom Raiders' Ultimate Weapon, Wolfgang and Dr. Krankcase were assigned to find and capture Kaos, since a Portal Master was needed to travel through time to the era when the cheese would become rotten enough to power their weapon. During Dr. Krankcase's battle with the Skylanders, Wolfgang arrived at the laboratory. Instead of assisting Krankcase against the Skylanders, he snatched up an immobilized Kaos and left with him. At Time Town, Wolfgang began disrupting time with Kaos's powers, but was confronted by the Skylanders before he could take the evil Portal Master to the future with him. Cornered, the werewolf proclaimed that the Golden Queen could have the present period of Skylands, but the future of it was his. Using Kaos's powers, Wolfgang traveled 10,000 years into the future where he successfully conquered Skylands and became its emperor. He created a giant speaker called the Big Bad Woofer, which he used to generate loud sound checks, blowing everything up as a result. If he succeeded in performing his loudest concert, Wolfgang would be able to control the minds of many inhabitants.

With Da Pinchy's help, the Skylanders were able to travel to the future to stop Wolfgang and disrupt his Big Bad Woofer from broadcasting his concert. Wolfgang offered the Skylanders to rule Skylands alongside him as there was no Kaos, Doom Raiders, and pizzas can be delivered in "thirty seconds or less". He immediately dismissed the idea, and declared that both he and the Skylander fight instead. After a musical battle, Wolfgang was defeated and captured, restoring the timeline in the future. Before his defeat however, he was able to send the slice of cheese (which became stinky enough to power the Ultimate Weapon) back to the present for the Golden Queen to use.

After being confiscated, he was brought back to the future by the Skylanders for his Villain Quest with a futuristic descendant of the Mabu, Quigley, named Q.U.I.G.L.E.Y., whose task for him was to capture 100 escaped Lockmaster Imps in a Vacuum Droid. The rehabilitated werewolf was rewarded with Q.U.I.G.L.E.Y.'s thanks, a new outfit, and the Tin Foil Hat.

Wolfgang and the other Doom Raiders infiltrated the Skylanders Academy by posing as a music band for the school graduation called "The Evil Imposters". Once all of their equipment was set, they discarded their disguises and proceeded to take over the school, with Wolfgang scaring away the attendees. As he was coming up with a new victory tune called "No More Skylanders Ever", Whisper Elf cut the strings of Wolfgang's bone guitar, enraging him into chasing the Minis. The red werewolf pursued few of the Minis until he cornered them inside the Academy, only for Dr. Krankcase to crash into him, which knocked both Doom Raiders unconscious.

Wolfgang reappears as a playable racer equipped with his own vehicle, the Sub Woofer. When bested in his Boss Pursuit at the Clock Rock, the player will be able to race as Wolfgang.

During their rehabilitation, Master Eon gave some of the villains a choice – either go back to a newly reformed Cloudcracker Prison or become Skylander Senseis, teaching a new generation of Imaginators their formidable battle skills as well as how to stay clear of a life of crime. They accepted the deal but first had to prove themselves by re-arranging all the books in the Academy’s library, a task which took almost two years, almost driving Wolfgang mad again. But he got through it and realized he could earn more respect as a Sensei training the Bowslinger Class than he ever could as a musician.

Once recruited into the Doom Raiders, Wolfgang was forced to keep his rage in check when under the leadership of the Golden Queen. When the Doom Raiders were becoming captured by the Skylanders, Wolfgang appeared to be aware that the Golden Queen didn't care about the loss of her comrades as he did and he made a play for control over the villainous group. Eventually, he turned against the Doom Raiders when he traveled 10,000 years into the future where he ruled Skylands as its emperor. However, now that he and the few of the other Doom Raiders are Skylanders themselves, they are now on much friendlier terms with each other, following King Pen's orders without question, even though they can have disagreements from time to time.

Wolfgang is clear on his distaste for the Dark Portal Master because of his smell and attitude. When he kidnapped Kaos to use his powers on Time Town, Wolfgang spent much of his time berating the Portal Master on how he approaches attacking the Skylanders and harassing him by spinning the wheel he was tied to.

Playing his bone harp, Wolfgang is able to release evil music as a means of bringing harm. He also uses the sharp blade on the harp as a melee weapon, and can slide into enemies.

In Skylanders: Battlecast, he has the Special Ability to perform a Siren's Song which lures in the weakest enemy, and manipulate his damaging songs to attack several enemies at once. His Gear is the Reverb Pedal, which copies the last non-character spell cast.

In Imaginators, Wolfgang's harp has been slightly modified, replacing the melee attack with bone arrows that play notes while they are shot. He can also summon speakers that play deadly music in a straight line, and use his knee slide attack much faster.

Pump up your arrows and speakers.
Sick dash combos.

Wolfgang's song, including his Villain theme, are all from Fatal Error, from APM Music.

Wolfgang as seen in The Discovery trailer

Wolfgang faces off against the Water Trap Master, Snap Shot.

Wolfgang fighting with the forces of good

Wolfgang arguing with the Golden Queen. 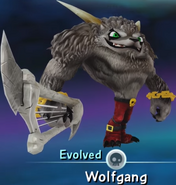 Wolfgang tries to persaude the Skylanders to join him

Wolfgang riding in his Sub Woofer vehicle in Skylanders: SuperChargers

The Sky Trophy, featuring Wolfgang's visage
Add a photo to this gallery 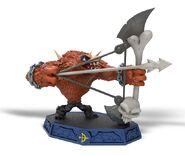 Retrieved from "https://skylanders.fandom.com/wiki/Wolfgang?oldid=114108"
Community content is available under CC-BY-SA unless otherwise noted.