As a Portal Master, Wizbit can control Portals. He also is an adept user of magic, as he could cast many spells such as invisibility, store the Big Bad Ice Bomb in another dimension, conjure magic ropes that nullify powers, and a powerful spell which shattered the Mask of Power and scattered the fragments across Skylands.

When the Nightmare King Nefarion was ruling Skylands and wiping out the Portal Masters, he was imprisoned in eternal winter by an unknown hero.

When Kaos went back in time, he was able to trick Wizbit into thinking the Skylanders from the future weren't coming to the past to help the Mabu Portal Master stop Nefarion. Eruptor, Grim Creeper and Slam Bam were subdued with enchanted ropes by the weary Wizbit after he saved them from the Forest of Fire and Kaos revealed himself. With the Skylanders tied up, Wizbit revealed to Kaos his creation, the Big Bad Ice Bomb, which he intended to use to freeze King Nefarion and end his evil reign. However the evil Portal Master deceived Wizbit by delivering him to King Nefarion and revealing the existence of the Bomb.

Wizbit was later imprisoned in Nefarion's castle dungeon, blaming himself for believing Kaos's lies, but was found by Grim Creeper's ghost form, who informed the Portal Master of Slam Bam and Eruptor being trapped in a cave-in. With the Skylander's help, Wizbit escaped his cell and opened a portal from Nefarion's throneroom to teleport both Eruptor and Slam Bam out of the cave-in in time to confront Kaos and King Nefarion.

During the struggle, the Skylanders were able to retrieve the Mask of Power and allow Wizbit to scatter the pieces across Skylands. However there was still the threat of the Big Bad Ice Bomb going off. While King Nefarion fled, and Kaos and Glumshanks teleported back to the future, Eruptor sacrificed himself by swallowing the Big Bad Ice Bomb in order to buy his friends time to escape. With the timeline restored, Master Eon transported the group and Wizbit back to the present. Both Master Eon and Wizbit then used their power to unfreeze the Eruptor that was first discovered frozen in ice, the same Eruptor who went to the past to stop Kaos. Upon being revived, the lava monster burped up the remains of the Big Bad Ice Bomb which was revealed to be the Fire segment to the Mask of Power. 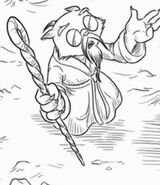 Wizbit with the other Portal Masters (Kaossandra, Kaos and Master Eon) in Skylanders: Ring of Heroes
Add a photo to this gallery

Retrieved from "https://skylanders.fandom.com/wiki/Wizbit?oldid=123841"
Community content is available under CC-BY-SA unless otherwise noted.