The Winged Boots is a magic item that comes with the Dragon's Peak Adventure Pack. When placed on the Portal of Power in the console versions, the boots give the Skylander a speed boost for as long as it is on the Portal and as it is active. 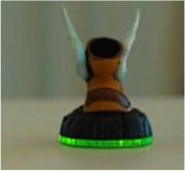 Winged Boots
Add a photo to this gallery

Retrieved from "https://skylanders.fandom.com/wiki/Winged_Boots?oldid=105936"
Community content is available under CC-BY-SA unless otherwise noted.