“All Wound Up!”
—Wind-Up's official catchphrase

Wind-Up is a wind-up toy who is one of the Tech core Skylanders in Skylanders: Swap Force. He is available in the Sheep Wreck Island Adventure pack. A single pack was offered at Gamestop in the US with pre-orders for Skylanders: Trap Team.

Wind-Up is a blue and gold metal wind-up robot, of short stature. Each of his arms are blue in color with a gold ring on the end, a gold wind up key on top, and his hands consist of silver claws; he also has two metal legs with blue ankled feet and gold shoe-like toes. His head is blue with a gold bottom jaw, mechanical segmented eyes, and a large key on top. A wind up coil keeps Wind-Up's body connected as a torso.

Built in the enchanted workshop of a toymaker obsessed with time, Wind-Up was created to help keep his massive collection of complicated clocks working perfectly. But when the toymaker popped out of existence in a freak accident caused by putting hot cocoa in a cross-wired Arkeyan oven, Wind-Up found himself surrounded by an invading Cyclops platoon - with an eye towards claiming the toymaker's secrets for themselves. Using split-second timing, clockwork strategy, and his totally wound up energy, Wind-Up bravely sprang into action and handily defeated the Cyclops. He later joined the Skylanders to help swing the pendulum the other way in their fight against anything that threatens Skylands. 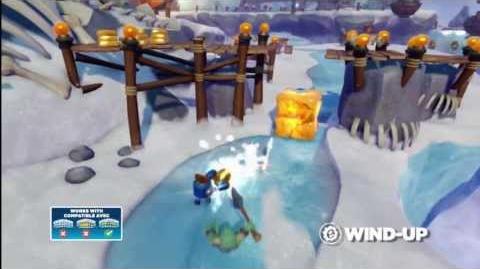 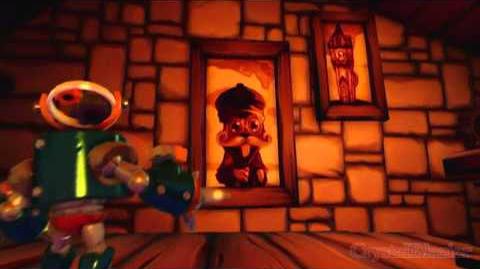