Wildfire is a golden lion who is one of the Trap Masters in Skylanders: Trap Team. He is of the Fire element.

Wildfire is a loyal lion with a heart of gold, but he can be fierce in battle. He's very protective of the Fire Claw Clan and is always ready to lend them a magical hand when they need it.[1]

Wildfire was once a young lion of the Fire Claw Clan, about to enter into the Rite of Infernos – a test of survival in the treacherous fire plains. However, because he was made of gold, he was treated as an outcast and not allowed to participate. But this didn’t stop him. That night, Wildfire secretly followed the path of the other lions, carrying only his father’s enchanted shield. Soon he found them cornered by a giant flame scorpion. Using the shield, he protected the group from the beast’s enormous stinging tail, giving them time to safely escape. And though Wildfire was injured in the fight, his father’s shield magically changed him – magnifying the strength that was already in his heart – making him the mightiest of his clan. Now part of the Trap Team, Wildfire uses his enormous Traptanium-bonded shield to defend any and all who need it!

When Tessa, Cali, Weeruptor, Flynn and Chopper were being attacked by Troll Bombers, Wildfire arrived just in time to save Weeruptor by using his Traptanium Shield like a boomerang to take out few of the bombers. As they were still outnumbered by the Troll Bombers, the golden lion aggressively spoke to the trolls on behalf of Weeruptor by giving the enemies a chance to flee before he gets nasty and crush their ships with the trolls still in them. The intimidation worked, and the Troll Bombers retreated out of fear of Wildfire's wrath. With Flynn and Chopper safe, the group began their trek back to the Skylanders Academy, but not before Wildfire sees promise in Weeruptor, proclaiming that the Mini has the 'fire to be an amazing Skylander one day'.

By the time Wildfire and the others got to the Academy to expose Kaos, the evil Portal Master was already being driven out by Food Fight.

Wildfire was one of the Trap Masters who confronted the Doom Raiders in their hideout within the Outlands. Using his Traptanium shield, he protected his fellow Trap Masters against the Golden Queen's attack, which was reflected back at her and The Gulper.

Using his father's Traptanium shield, Wildfire can use it as defense, protecting himself even from the Golden Queen's magic and burning enemies that approach, or as offense, bashing enemies with it. Wildfire can also summon chains of fire that pull enemies closer and breathe fire with a mighty roar, and temporarily destroy his shield to assume a quadruped stance for melee attacks.

Skylanders Power Play- Wildfire
Add a photo to this gallery

Wildfire taking on a group of Trolls 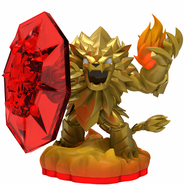 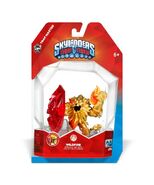 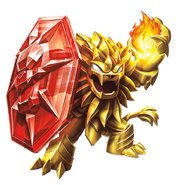 Wildfire Transparent Render
Add a photo to this gallery

Retrieved from "https://skylanders.fandom.com/wiki/Wildfire?oldid=111967"
Community content is available under CC-BY-SA unless otherwise noted.