Wild Storm is an Air elemental Sensei of the Knight Battle Class. He is included in the Cursed Tiki Temple Level Pack.

By the time he was 10 years old, Wild Storm had already mastered the Air Blade. With no family of his own, he spent much of his youth traveling throughout Skylands, offering his combat services to the highest bidder as a soldier of fortune. On one such occasion, he was hired by Kaos to break into a pirate outpost in Skyhighlands to steal their legendary gold detector. But little did Wild Storm know, he was only being used by Kaos to scout their defenses – and he was captured by the pirates! While imprisoned in the highest tower, the powerful winds blew through his cell, fueling his anger. But Wild Storm would not be contained! Harnessing the storm’s energy, he grew 3 times his size and exploded out of his prison – vowing to put a stop to Kaos once and for all. Soon after, he met Master Eon, who agreed to help him, provided Wild Storm would share his skills in swordsmanship with other Skylanders, as a Sensei of the Knight Class!

Wild Storm can use his blade both for melee attacks and throwing bolts of lightning. He is also skilled in hand-to-hand combat, using headbutts and a beast form to overpower foes close by. He can also create an uproar and breathe clouds into the battlefield, that can be electrified by his blade's lightning.

Upgrade your inner beast with these wild primary upgrades.
Harness the power of lightning by upgrading your secondary attacks with this path. 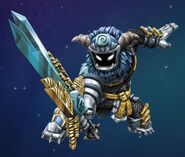 Artwork without effects from Skylanders Creator. 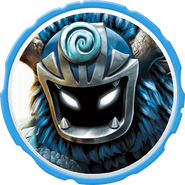 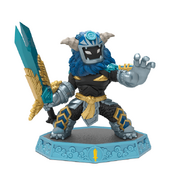 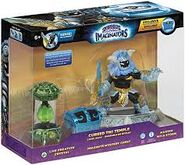 Retrieved from "https://skylanders.fandom.com/wiki/Wild_Storm?oldid=124998"
Community content is available under CC-BY-SA unless otherwise noted.