Whirlwind was a Skylander influenced by ships from Star Control 2; her Tempest Cloud ability functions very much like the spinning blade discs of the game's Kohr-Ah Marauder ships. Originally, her primary attack was an attempt as a wind projectile but after many iterations, the wind project was deemed visually weak. After multiple meetings, one designer jokingly said "what if she shoots rainbows" to which Paul Reiche responded enthusiastically "Yes! Make them the deadliest rainbows ever." Whirlwind would go on to really set the bar for crazy Skylander abilities. The rainbow theme really let her upgrades shine with the Rainbow Singularity being a benchmark for over-the-top powers. The slow methodical approach of its harmless-seeming projectile conveys a disarming sense of calm before it explodes into rainbow death. The Dual Rainbow upgrade was to be named Double Rainbow after the Yosemitebear Mountain meme, but was changed due to a legal issue (there is an ice cream company of that name).[1]

Whirlwind is as brave as she is graceful. Her mood swings can be as changeable as the weather, but since becoming a Skylander, she has tried to keep her temper in check.[2] However, she doesn't keep a calm head when provoked.[3] Whirlwind is strong-winged, wild and ferocious. But deep down, she is pure of heart, having held no grudge against the dragons and unicorns for shunning her.

Whirlwind is an air dragon with unicorn ancestry – two species that could not be more opposite in nature, which made her never quite fit in with either group. Other dragons were envious of her beauty, while unicorns shunned her for her ability to fly. But Whirlwind found peace within the dark and stormy clouds, where she learned to harness the tempest power within her. Despite her turbulent youth, she was the first to defend both dragons and unicorns when the trolls began hunting them, unleashing her ferocity in a brilliant and powerful rainbow that could be seen throughout many regions of Skylands. From that day forward, evil-doers would quake when dark clouds brewed, and run from the rainbow that followed the storm.

Born of both unicorn and dragon descent, Whirlwind often felt like an oddball outsider. Unicorns were unimpressed with her wings and dragons disliked the horn on her head. Shunned and seeking solace, Whirlwind retreated to the cover of storm clouds, where she learned to harness her tempest power. When a troublesome troupe of trolls came searching for unicorn tails and dragon scales, Whirlwind burst from her cover and unleashed a blinding rainbow to send them fleeing. From that day on, unicorns and dragons saw her in a new light. Seeing her purity of heart, Master Eon made her a Skylander. Today, nothing makes a troll tremble like a small, stormy cloud moving speedily towards him.[4]

Some time after joining the Skylanders, Whirlwind would encounter and recruit Warnado.

Years later, Whirlwind rescued the Frost Elves of Winter Keep from a curse of eternal midnight by enchanting a crystal horn called the Illuminator to grant eternal daylight to the elves. This not only helped break the curse, but also protected the Keep and gave the elves courage during their fight against potential attacks. However, by granting eternal daylight, the Elves never know when it is time for bed.

Whirlwind was one of the many Skylanders that were summoned to stop Malefor from attacking the Skylanders Academy. Under Blades' command, she and the other aerial dragons charged towards Malefor to attack his eyes, but were all swiftly shot down by the evil dragon's powerful flamethrower. Whirlwind's powers were then absorbed by Malefor when he defeated the other Skylanders with a single strike of his tail. When Spyro, Cynder, Hex and Wallop destroyed the crystal Malefor used to steal Skylander powers, the act restored all of the Skylanders' strength and abilities, including Whirlwind's.

As a result of spending time within dark storm clouds, Whirlwind gained the ability to shoot rainbow energy from her horn, which can also be used to heal her allies. She can launch storm clouds at her enemies with a single clap of her wings. Being part dragon, Whirlwind has the ability to fly.

Opting for the Ultimate Rainbower path further improves Whirlwind's 'Rainbow of Doom' attack, leaning to more offensive gameplay. The attack can be upgraded to launch a second rainbow, effectively extending the attack distance, and also deal more damage. The attack can also be charged up and then unleashed to create a 'Rainbow Singularity' black hole, sucking in enemies and leaving them susceptible to attacks.

Opting for the Tempest Dragon path further improves Whirlwind's tempest clouds, leaning to more defensive gameplay. The attack can be upgraded to do more damage, but also unleash more rainbows when hit by one. With the 'Tempest Matrix' upgrade, Whirlwind can create lightning between the clouds, allowing her to create a barrier that electrocutes enemies and protects her from attackers.

She holds the ability to enchant an object with her power, as evident when she empowered the Illuminator in Winter Keep. In Skylanders: Battlecast, Whirlwind also has the ability to conduct lightning through her horn to shock enemies and drain their health with a vortex or tornado. Her Special Ability is the Dragon's Wisdom, which raises the XP of her team, and her signature Gear is the Chromatic Bauble, which restores health to whichever ally is active.

Gain a 20% Health bonus while in the Radiant Isles. The scroll for this upgrade can be found in Leaflook Village. 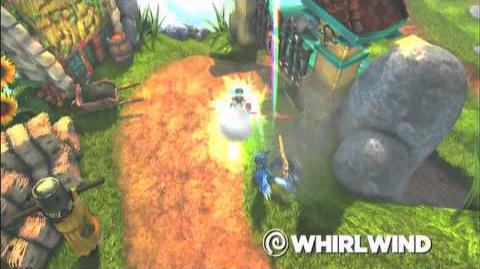