Wham-Shell is a crimson-colored crab in Skylanders: Spyro's Adventure. He is of the Water element.

According to Gameplay Designer Nah Loh, Wham-Shell has one of saddest typos in all of Skylander upgrades, but introducing interesting vocabulary in Skylander upgrades was very important to Nat. Him being exposed to new words was something Nat thought he could bring into the Skylander universe. Wham-Shell represents the very extreme of this. The Skylander's primary ability is called the Malacostacan Mace which should be Malacostracan Mace after the taxonomic class malacostra under the subphylum of crustacea which crabs belong to. Another funny typo is the upgrade Mega Trident which was an oversight, since Wham-Shell originally had a trident as his weapon. Then there are pseudo-Latin upgrades such as Starfishicus Gigantus which may go against the whole "educating with words" goal but they were meant to be fun even if they ended up being confusing.[1]

Regal and heroic, Wham-Shell never forgets the common clams and protects the seas for all his worth.[2] As the son of an underwater king, he isn't used to being refused anything.[3] It is also said that he is usually a pretty together kind of guy.[4]

Wham-Shell was the long-standing king of a kingdom deep in the oceans of Skylands that for a long time lived peacefully. That is, until his underwater utopia was invaded by a legion of oil-drilling trolls that scattered his people to the wind. Armed with a powerful mace that had been handed down from one king to the next for generations, Wham-Shell defeated the greedy trolls and drove them away. Soon after, he joined the Skylanders to help defend against this type of atrocity ever happening again.

Skylands sea shanties tell of a crustacean king called Roland, who ruled over beautiful bubble buildings and priceless pearl pastures. Good King Roland had ruled peacefully throughout his reign, but tragedy was about to strike. The trolls had arrived. They began by building rigs and platforms to pump oil from the ocean bottom. Soon, they became even greedier and sent their submarines to invade this undersea realm. Roland's son, Wham-Shell, was sent into a spluttering rage. He collected the magical mace of the giant clam kings and swam to the surface to shatter the trolls' equipment into a million smithereens. Wham-Shell's successful skirmish soon reached the ears of Master Eon. Right there and then, he made the crafty crustacean a Skylander and king protector of all the seas.[5]

Gill  Grunt and the Curse of the Fish Master

Wham-Shell and Zap were called by Master Eon to assist Gill Grunt when the Gillman was about to be eaten alive by a rampaging Cloud Kraken. They both saved Gill Grunt and attempted to stop the Cloud Kraken, only to make the beast turn its blind fury upon a pirate ship called the Fearsome Fang and its crew. The ship's captain, Grimslobber, mysteriously scared off the Cloud Kraken without having to do a thing, confusing Gill Grunt, Zap, and Wham-Shell.

When Grimslobber called Gill Grunt names to try and pick a fight, Wham-Shell was the first to defend his fellow Skylander before Zap, but was calmed down by Gill Grunt as they didn't want any trouble with the captain and his band of pirates. Zap then unintentionally asked them about a treasure one of the pirates accidentally blurted out, prompting the seemingly friendly Grimslobber to surround the Water Skylanders with his crew and attack them. Gill Grunt, Zap, and Wham-Shell narrowly escaped the Fearsome Fang and dove into the safety of the sea, leaving Grimslobber to swear vengeance.

The Water Skylanders then hear from Spyro that Kaos was after the Water Fragment as well, and Gill Grunt quickly lead his fellow Water Skylanders to the Kingdom of the Merpeople, knowing that the merpeople, who have swam the waters for thousands of years, would know the location of the fragment. The Skylanders discovered the kingdom was deserted, with only the elderly, children, King Scalebeard, Prince Aquan, and Princess Finella still within the kingdom's barrier. Suddenly Prince Aquan and Princess Finella fell under a strange trance and swam out of the kingdom along with several other merfolk, and the Skylanders followed them in hot pursuit to see where they were going.

With the help of Zap's speed, the Water Skylanders were able to keep up with the merfolk, avoiding a swarm of electro-jellies along the way. During the chase, Wham-Shell mysteriously had fallen under a spell and turned on Gill Grunt and Zap. The rogue crustacean captured Zap after knocking him nearly unconscious with his starfish bullets and dragged him into a cave where the hypnotized merfolk went into.

Wham-Shell was later revealed to be under the control of Captain Grimslobber, who was using the Fish Master's Crown to force the merfolk into digging out the gem-eels and hauling them to the surface so that he could become rich. Gill Grunt was able to free himself from the curse with the help of Zap, causing Grimslobber to lose control over a portion of his hypnotized victims. During the confusion, Wham-Shell was freed from the curse and released the Gem-Eels, causing Grimslobber loses his hold on the Crown, and it shattered on the ocean floor into two pieces, fully freeing the merfolk. As the pirate captain made a hasty retreat, Wham-Shell followed after Gill Grunt back onto the deck of the Fearsome Fang along with Zap. With the help of the freed merfolk, and even Spyro, the Water Skylanders bested Grimslobber and his pirate crew.

Grimslobber pulled out a pistol and attempted to kill Gill Grunt when the captain was knocked overboard and eaten alive by the Cloud Kraken. Kaos then revealed his presence, having recovered the pieces of the broken Fish Master's Crown that supposedly contained the Water fragment. After taunting the Skylanders, the evil Portal Master made his leave but not before sinking the Fearsome Fang. Spyro, Gill Grunt, Zap, and Wham-Shell quickly escaped off of Grimslobber's sinking ship through a portal.

Back at the Eternal Archives, it seemed the Skylanders had failed their mission to retrieve the Water fragment, when Gill Grunt checked Grimslobber's satchel he brought back with him and held a dirty rag the captain had used to wrap the Fish Master's Crown. The rag soon revealed itself to be the Water Fragment, making the Skylanders realize that Kaos had stolen nothing more than a worthless broken crown. Knowing that Kaos would be after the next fragment to the Mask of Power, the Skylanders would be ready for him...

Using his mace, which is called the Troll Cracker (originally called the Claw Cracker due to him defeating the trolls), Wham-Shell can release electricity discharged from mace's spiked tip. He can also strike his enemies with his mace and release pulses of water from it. In "Gill Grunt and the curse of the Fish Master" it is shown that the mace can magically return to Wham Shell after being thrown.

Gain a 20% Speed bonus while in the Radiant Isles. The scroll for this upgrade can be found in Whipwind Mountains. 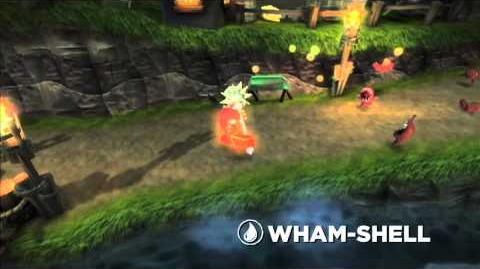 Brace For The Mace! Meet the Skylanders Wham-Shell (extended) 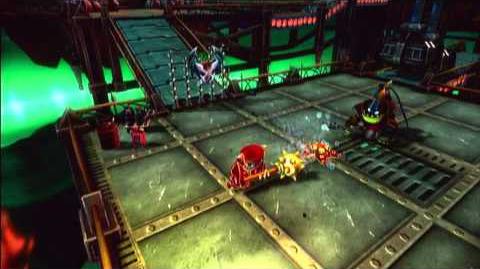 Retrieved from "https://skylanders.fandom.com/wiki/Wham-Shell?oldid=119151"
Community content is available under CC-BY-SA unless otherwise noted.