Voodood is an orc Skylander in Skylanders: Spyro's Adventure. He is in the Magic element.

Voodood was known as a highly decorated soldier of his people, commanding a well-known team of dangerous warriors. When not fighting evil, he is constantly searching for new and exotic bones to expand his collection. Voodood also insists that he has a heart of gold, despite knowing about the Orcs' bad reputation.[1]

Voodood was a brave warrior among his people. During his rite of passage as a young orc, he entered the Cave of Trials to prove his worth. It was there he found much more than expected. Lured by a brilliant light, Voodood discovered the skeleton of an enormous dragon with an ornate axe buried where the heart would have been. The village was astonished when he exited the cave holding the legendary Axe Reaver and wearing the dragon skull on his head. Voodood quickly became warrior leader and defended his homeland from many beasts and invaders... until he was the last of his tribe. Soon after, he joined the Skylanders.

The Ooga Warriors were one of the most revered tribes in all of Skylands, yet something haunted them - every night, wild dragons would circle their houses and any warrior not taking shelter would end up missing, presumably eaten. However, the only weapon that could destroy these dragons was the legendary Axe Reaver, long lost for centuries and said to increase in power if its wielder had true inner magic.[2] The Ooga Orcs once had a reputation for being the fiercest fighting force around. Any Orcs who fancied signing up had first to retrieve a pebble from deep within the trouser-wettingly terrifying Cave of Trials. One such wannabe was Voodood. Down he went, into the dark dirty depths. Suddenly, a beam of light appeared ahead, Voodood stumbled forward into a chamber containing the skeleton of a dragon. In place of the dragon's heart lay a gleaming gem with an axe sticking out.

Voodood stepped from the cave with something far better than a pebble; he had the magical Axe Reaver, along with the skull of the slain dragon (which he would later adapt into an outlandish hat). The Ooga folk made Voodood their leader at once, and he became a great Orc hero. But even the Ooga could not defeat the dreadful Darkness. The whole tribe marched to meet this new threat, but only Voodood returned alive. So, as you might have guessed, he joined the Skylanders.[1]

Voodood, Boomer, and Ghost Roaster were Buzz's elite team of Skylanders when they mysteriously disappeared while on a mission at Motleyville and hadn't returned for months. SuperChargers Spitfire, Stormblade and Nightfall, were assigned to find the lost Skylanders at their last known location. Upon getting ambushed by Spell Punks lead by Spellslamzer, the SuperChargers were suddenly defeated and knocked unconscious by Voodood, Boomer and Ghost Roaster, who were now working for Spellslamzer.

With the three SuperChargers imprisoned, Spellslamzer announced his plan to raid the Mabu Radiance mines of its rare and powerful minerals, controlling the crystal supply to become the supreme power in all of Skylands. As Stormblade wondered why Voodood, Ghost Roaster, and Boomer would turn their backs on Skylands and Master Eon, Ghost Roaster revealed that he and the other two Elites grew tired of being tossed aside and forgotten while the Skylanders such as the SuperChargers, SWAP Force and the Giants were more appreciated. Voodood later caught Spitfire, Stormblade and Nightfall when they attempted to escape, and Spellslamzer had the three SuperChargers strapped helplessly to the front of their own vehicles as the evil Spell Punk and his army rode out towards the Mabu mines.

Using his axe, Voodood can attack enemies using magical energy that channels through his weapon, he can even create magical tripwires with it. He can also use his axe as a grappling hook to latch onto his opponents, stunning them while he pulls himself towards their location to finish them off in close combat. In "Secret Agent Secrets" it was also shown that Voodood's axe can unleash magical blasts. 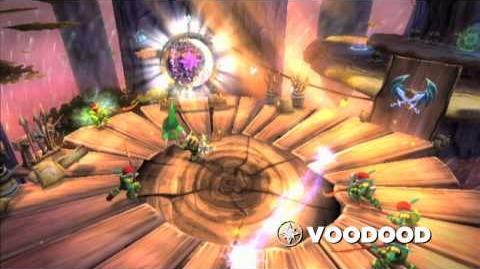 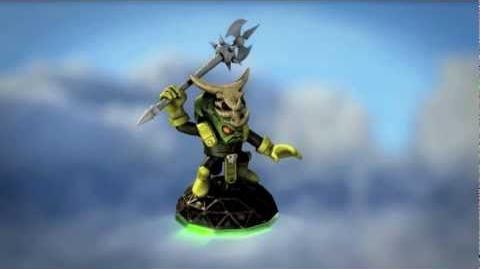 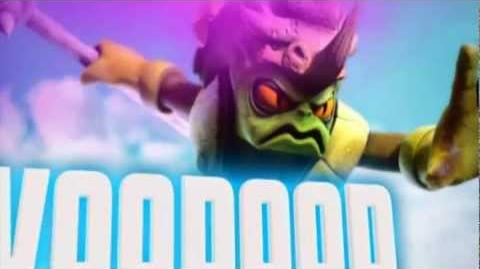