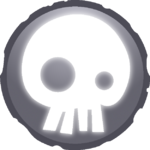 “Do you like scary stories? Wanna hear ours?”
—Ring of Heroes Relationship Description

Undead is one of the ten elements in the Skylanders series. Despite its dark origins, the Undead Element is a vital part of the Core of Light. It combines with the other Elements in some unusual, and unexpected, ways.[1] This element is associated with shades of gray, white, pure black and occasionally thistle, grayish blue and deep purple.

Many creatures, including the Skylanders, have been changed forever as a result of visiting the Underworld. Some have found their very souls twisted beyond recognition. Others, such as Cynder, simply like hanging out in graveyards. But all have it within themselves to use their Undead abilities for good. The Undead Element inhabits the darkest corners of Skylands, lurking in the shadows, ready to pounce - and then serve up a lovely snack or tell a terrible joke.[2]

While the Undead Element is strong against the Life Element, it is at the mercy of Magic. Spells and sorcery really take their toll, and Undead Elementals should beware the wrath of wizards.[1]

In Skylanders: Ring of Heroes, Undead is weak to Fire and Magic, and strong against Life and Earth.

The Skylanders who are associated with the Undead element are mostly creatures who hail from the Underworld such as skeletons or ghouls and living creatures who have been corrupted by the element. They use the power of the undead and spooky magic, as well as some abilities relating to poison and contagion, to aid them in battle. When forming a bridge to access their Elemental Gates, Undead Skylanders create a bridge that are formed from the bones of their fallen enemies.[3]

In Skylanders: Trap Team 's turret challenges, Undead Skylanders have the special ability Spectre Swarm, which gradually damages enemies in an area. In Kaos Doom Challenge, they can summon skeletal hands as their towers, which throw flaming skulls at enemies and slam the ground while recharging.

In Skylanders: SuperChargers, Undead-aligned Portal Master Powers include summoning a flaming skull minion that attacks enemies for you and reduce the attack damage of enemies with an enervating curse. Those are distributed in several conditions, and the names are as follows:

Undead Imaginators can choose from four abilities as their secondary attack:

The Undead Element in Battlecast revolves around draining enemy health, xp and power, with abilities pertaining to allies being powerful but at great costs or risks.

The scrapped team spell for Undead characters is the Dirge of Undead, a haunting song in which the active character can drain the enemy's life force for each Undead character in the team, acting as a cheaper and inverted Slice of Life.

Fright Rider and Eye-Brawl, the new Skylanders of Skylanders: Giants

Animated version of Touch of Darkness. 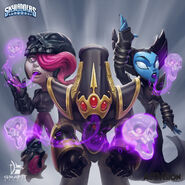