“Even more dangerous than a Brussels sprout.”
—Villain Vault

Tussle Sprout is a Brussels sprout who is one of the playable Earth villains in Skylanders: Trap Team. Not long after the Skylanders had arrived at Know-It-All Island, Tussle Sprout and a gang of Plant Warriors attacked them after they destroyed a Traptainum crystal cluster and fell through a false floor. Unfortunately, he was quickly taken down and trapped.

As a trapped villain, his main attack is releasing a toxic cloud around himself that quickly expands and damages everything it hits. His secondary attack tosses a seed to the ground, which turns into a patch releasing toxic fumes. He can have up to 4 such patches active at the same time.

During his bossfight, he only uses his main attack, and it has a much greater recharge time. 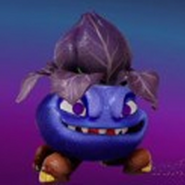 Evolved Tussle Sprout
Add a photo to this gallery

Retrieved from "https://skylanders.fandom.com/wiki/Tussle_Sprout_(villain)?oldid=112010"
Community content is available under CC-BY-SA unless otherwise noted.