Trophies are special Magic Items in Skylanders: SuperChargers, which are mostly available in Racing Action Packs along with a SuperCharger and the SuperCharger's signature Vehicle. These figures unlock playable Villains piloting their own personal Vehicles for use in races. Apart from the Kaos Trophy, they also unlock new race tracks and racing modes.

The Kaos Trophy was originally exclusive to the Dark Editions of SuperChargers and SuperChargers Racing (Wii), but was later released individually in a single pack. Unlike the other Trophy Villains, Kaos is unlocked and playable by default, though only in Sky races. He is also the only Villain included in this Trophy.

In SuperChargers, both the 2 original tracks and the 2 tracks unlocked by the gold trophy receive a Boss Pursuit mode. In this mode, you face off against one of the 4 Villains included in the Trophy. Another new mode is the SuperVillain Cup, in which you race against multiple SuperVillain racers throughout all the tracks. The final additional mode is the Mirror Cup, where all 4 tracks are played in sequence, but mirrored from their original layout.

In SuperChargers Racing, each gold trophy unlocks a new Tour, featuring the original 5 tracks as Mirror Races, as well as several modes for the 2 new tracks. Villain Races are only available for the level associated with the main Villain of the Trophy, and is the final race in the Tour. Upon completing it, you will open up the paths to the Tour Cup and the chest unlocking the Villain. The other 3 Villain Chests are simply locked behind Star Gates.

The Sea Racing Action Pack, including the Sea Trophy.

The Sky Racing Action Pack, including the Sky Trophy.

The Land Racing Action Pack, including the Land Trophy. 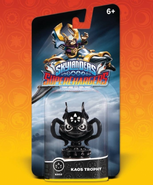 The Legendary alternative to the Sky Racing Action Pack.
Add a photo to this gallery

Retrieved from "https://skylanders.fandom.com/wiki/Trophies?oldid=112166"
Community content is available under CC-BY-SA unless otherwise noted.