“Be Afraid of the Bark!”
—Tree Rex's official catchphrase

Tree Rex's spiky, glowing arm cannon was a starting point for his creation. His Titanic Elbow slam was Hulk inspired and Tree Rex's soul gem (a woodpecker nested on his back that pecks nearby enemies to death) was a particularly amusing upgrade to have made.[1]

Tree Rex is a natural protector who is as wise as he is majestic, unwavering in his mission to protect Skylands from evil magic.[2] He has also dedicated his life to maintain the natural balance of all things.[3]

Long ago before the Giants protected Skylands, Tree Rex was a majestic tree living peacefully in the ancient woods. But this tranquil peace came to an end when the Arkeyans built a nearby factory to produce war machines. After years of his soil being poisoned by the magic and tech waste from the factory, he mutated into who he is now - a powerful Giant who will crush anything that threatens the natural order of things.

Long ago before the first Giant had set foot on Skylands, there stood a tall, towering tree. It loomed above the other trees in the forest and shielded the creatures below with its mighty branches. When the Arkeyans built a factory at the edge of the forest, little did they know it would ultimately spell their doom. Magic leaked from the factory, poisoning the soil over hundreds of years. Slowly, bit by bit, that tallest tree began to mutate. Its branches became arms, its trunk became a body and its roots formed into a particularly massive pair of legs. Tree Rex was born, and he wasn't happy. He immediately stomped the factory flat, then set off to find out who had stuck it there in the first place so he could stomp them flat too. Tree Rex believes there is a natural order to all things, and anyone who threatens that order had better prepare for a squishing.[4]

When Hugo called for any available Skylander teams to help Stealth Elf, Pop Fizz and Wash Buckler against an army of trolls, Gill Grunt's team, which consisted of Star Strike and Tree Rex, were unable to help as they were busy evacuating the inhabitants of Stonetown from a flood released from a cracked dam. Tree Rex was holding back a stone slab to keep the rushing waters at bay, while ushering his two companions to hurry before it gave way.

When Malefor was on his way to attack the Skylanders Academy, Tree Rex, the Giants and other Skylanders were summoned to stop the evil dragon. The Giants managed to grab hold of the Malefor's tail to hold him down, but were caught off guard when the mechanical tail was also made as a weapon, allowing Malefor to knock Tree Rex and the other Giants off-balance. In the end, all forty Skylanders, including the Giants, were defeated in a single blow, allowing Malefor to absorb their powers with a crystal to make himself more powerful. Once the crystal was destroyed by Spyro, Tree Rex and the other Skylanders were granted back their strength and powers.

In response to the sky rifts appearing around Skylands, Tree Rex and the other Giants were assigned to directly protect the Core of Light stationed at the Skylanders Academy in case of a direct assault. The giant Ent calmed Bouncer's fears when the robot giant expressed worry regarding the sky rifts that were threatening Skylands. Knowing that they are the first Skylanders, Tree Rex knew that the other Skylanders would look up to the Giants in need of courage and hoped that the others would find the answer to the rifts. When Kaos captured Master Eon and demanded the Skylanders to surrender the Core of Light, Spyro sent out the Giants, who proceeded to break apart the whole island, hurling the rocky remains at the attacking airships.

Tree Rex can smash his arm against the ground to crush enemies, and create massive shockwaves. When upgraded further, he can make his arm grow thorns, and cause even larger shockwaves. He can also charge at enemies and crush enemies with his elbow, and shoot solar beams at opponents.

In Skylanders: Battlecast, he is able to grow roots to restore his own health while increasing his maximum amount, being a formidable tank. His Special Ability is Overgrowth, increasing his max health, and his signature Gear is the Thorncaster, randomly increasing the cost of enemy spells. His scrapped card and signature Relic is the Deepwood Well, which gives power to the active character when they heal. 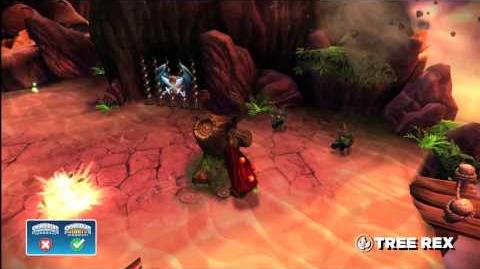