Trail Blazer is a fire unicorn who is one of the Fire Skylanders in Skylanders: Trap Team.

Trail Blazer is a red-skinned unicorn with black hooves. While a typical unicorn has a pointy horn on its head, Trail Blazer's seems to be a metal piece that spews with flame. Most of his torso and head are covered in bronze armor with the exception of his muzzle, ears, and yellow eyes with black pupils. His tail and mane are entirely made of fire.

Trail Blazer is a hot-tempered unicorn, being set ablaze when he saw anything unfair. However he also possesses a competitive spirit, which in one case causes him to discourage others.

Trail Blazer was always hot tempered, especially when he saw anything as being unfair. One day, he came across another unicorn that was trapped in a net. But it wasn’t just any unicorn. It was the mythical Unocorn – a magical creature with a Churro Horn that sprinkled enchanted cinnamon throughout Skylands. Trail Blazer freed it at once. Soon after, the Dark Wizards who had set the trap returned, and were very angry to find their dastardly deed had been thwarted. But Trail Blazer was much more fired up – for it turned out the spicy cinnamon from the Churro Horn had somehow rubbed off on him and mixed with his elemental fire. So he was literally set ablaze with fury! He then ran fiery circles around the wizards, forcing them to flee and never return. After realizing his newfound fury could be used to fight evil everywhere, Trail Blazer sought out the Skylanders, who immediately welcomed him as a member. 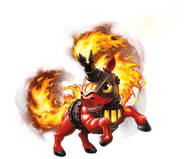 Retrieved from "https://skylanders.fandom.com/wiki/Trail_Blazer?oldid=114957"
Community content is available under CC-BY-SA unless otherwise noted.