The Tiki Speaky is one of the two Magic Items in the Mirror of Mystery adventure pack for Skylanders: Trap Team. It shoots down a lightning bolt and delivers a heavy amount of damage to enemies.

In Skylanders: SuperChargers Racing, it is one of the items found within item boxes during races. When used, it appears and damages every racer in front of the user three times. 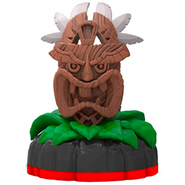 The Tiki Speaky figure
Add a photo to this gallery

Retrieved from "https://skylanders.fandom.com/wiki/Tiki_Speaky?oldid=109962"
Community content is available under CC-BY-SA unless otherwise noted.