Thunderbolt is one of the Air Trap Masters in Skylanders: Trap Team.

Thunderbolt's body is made up of swirling dark clouds.  His back and his stomach both are equipped with a steel plate embedded with the Trap Master logo. His face is light blue with yellow eyes that have red pupils, blue lightning streak eyebrows, and an steel head plating embroidered with the Air element that reaches across his forehead and steel shoulder guards.  His hands have four fingers and they are light blue with steel arm guards.

Thunderbolt is a fierce competitor who faces each opponent with honor and bravery.[1]

Epically strong and heroically competitive, Thunderbolt grew up on legendary Mount Cloudpierce. Every year, his people held a contest to determine who would wield the Storm Sword – a legendary blade with the power to change the seasons in Skylands. To Thunderbolt, this would be a great honor. But on the day he won the contest and was about to be presented with the sword, a Frost Mage snatched it and plunged all of Skylands into a wintery deep-freeze. Undaunted, Thunderbolt bravely took chase. Riding twin bolts of chained lightning, he overtook the mage, reclaimed the sword, and restored balance to the weather systems in Skylands. For his heroic actions, Thunderbolt was made a member of the Trap Team, and he now uses his Traptanium Storm Sword to strike evil at every turn!

Thunderbolt can use his enormous Traptanium Storm Sword which causes lightning to blast out with every swing, he can also use it to create a tornado that pulls in enemies. Thunderbolt can even shoot storm clouds from his own cloudy body which shocks enemies. 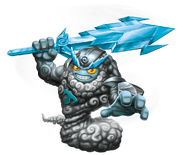 Thunderbolt Transparent Render
Add a photo to this gallery

Retrieved from "https://skylanders.fandom.com/wiki/Thunderbolt?oldid=123968"
Community content is available under CC-BY-SA unless otherwise noted.