Anchor Assault
Belly Flop
A Whale Of A Chomp
The Whalest Chomp
Now There's An Anchor!

Thumpback is a whale-like monster who is one of the eight Giants in Skylanders: Giants. He has a sailor counterpart who is available in Skylanders: Lost Islands.

Thumpback is steadfast, dependable, trustworthy, and gifted with the patience of an angler.[2]

Thumpback was once a crew member of The Phantom Tide, the most fearsome pirate ship in all of Skylands. But the actual pirating part about being a pirate didn't interest Thumpback so much as the benefits that came with traveling on a large ship. After all, his real passion was fishing. But when his chance came to finally ensnare the most elusive creature in the sky - the Leviathan Cloud Crab - he was pulled over board and carried off into the horizon. This was actually quite fortunate, because sometime later The Phantom Tide and its entire crew were banished to the Chest of Exile. Thumpback’s pirating days were over, but his legend as one of the first Skylanders had only just begun.

Thumpback was once a fearsome member of a pirate crew on board a very large ship (and it had to be large, what with him being a Giant). They sailed the seas, shivering their timbers, saying "aargh" and mucking about with treasure. But Thumpback wasn't happy. The pirate stuff was all well and good, but the big whale monster's real passion was fishing. When the opportunity arose to snag the biggest catch of his life - the legendary Leviathan Cloud Crab - Thumpback couldn't pass it up. Things didn't quite go according to plan, however, and Thumpback was carried off by the cloud crab. He refused to let go, and the rest of the pirate crew could only watch as he was dragged across the sky and over the distant horizon.

The cloud crab eventually got away, and Thumpback never found his ship again. His days as a pirate were over, but when he joined the other Giants to help fend off the Arkeyans, his days as a Skylander had only just begun.[3]

Skylanders Giants - Meet the Skylanders - Thumpback (Hail to the Whale) 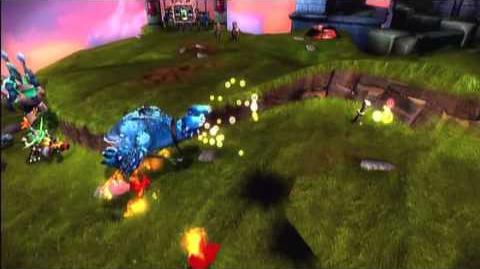