“A Troll in a jetpack. Now THAT'S a threat.”
—Villain Vault

Threatpack, formerly known as Professor Nilbog, is a troll who is one of the trappable Water villains in Skylanders: Trap Team. He is the head of the troll secret base that houses their super secret rocket, which was needed for the Skylanders to reach the Skyhighlands during "Operation: Troll Rocket Steal".

After sending several waves of Troll Warriors, Lob Goblins, Chill Bills, and Trolling Thunders to stop the Skylanders, Threatpack tried to fight them himself. However, his recklessness proved to be his downfall, as he was blown out of the air and trapped.

He returned as a SuperVillain racer in SuperChargers and Imaginators, piloting a Sky vehicle fashioned after his jetpack. 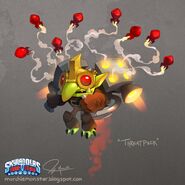 Threatpack's missiles while in turret

Retrieved from "https://skylanders.fandom.com/wiki/Threatpack_(villain)?oldid=121385"
Community content is available under CC-BY-SA unless otherwise noted.