Skylanders: The Machine of Doom is a novel based on the Skylanders series. It is a prequel o the events of Skylanders: Spyro's Adventure.

Master Eon sends Spyro, Gill Grunt and Eruptor to the Mabu Market to investigate what was going on, and once there, the Skylanders were attacked by the flying sheep and levitating fruits and vegatables. They soon find out that the sheep weren't really flying nor were the vegatables and fruits floating by themselves, but were being carried by invisible trolls who were led by a Spell Punk. Spyro captured the Spell Punk, who accidentally revealed that they were testing out the invisibility spell and were looking for the Chattering Key, but the trolls decided to do some mischief, drawing attention to themselves. The wizard and the trolls were then transported back home by Kaos to face punishment for revealing the existence of the Chattering Key to Spyro. The Skylanders return to Eon's citadel where they learn from Hugo that the Chattering Key is an artifact created by the Arkeyans rumored to unlock a tomb that contains a mysterious Arkeyan weapon. Knowing that the weapon is the kind of thing that Kaos would definitely go after, Spyro, Eruptor, Boomer, and Gill Grunt embark on a mission to get the Chattering Key from the depths of the Forest Fear before Kaos does, traveling to their destination with Flynn taking them there by hot air balloon. Upon arriving at the Forest of Fear, the Skylanders soon came in contact with unusual foliage, called the Fungus Rings of Despair, which trapps them in hallucinations of their worst fears. Spyro broke free of his fear, and freed the other Skylanders from the grip of the fungi. The Skylanders soon find the Chattering Key, which was being guarded by the statue of a stone wyvern. Spyro devises a plan to confuse the wyvern enough for him to steal the Key, and the Skylanders make a break for it with the statue chasing after them. Before they can escape with the key, Kaos appears, having captured Flynn. The evil tyrant reveals that he had used the Skylanders to brave the terrors of the Forest so that he can steal the key from them. Not wanting to endanger Flynn for the sake of their mission, the Skylanders allowed Kaos to take the key, and he summons a tomb that contains Pyramid of Just Rewards, activating one of its pillar that destroys the advancing stone wyvern with a beam of light. To prevent the Skylanders from following him, Kaos keeps Flynn hostage as the tyrant, Glumshanks, and their troll minions enter the pyramid. The four Skylanders, with the help of the Chattering Key, venture inside the pyramid through the other side where they come across the Machine of Doom itself.

As the pyramid crumbles around them, Kaos' minions make their escape using their master's transport portal, while the Skylanders save Flynn during the chaos. Spyro attempts to stop Kaos from escaping, but fails when the tyrant fires a magical lightning at the dragon. Boomer, now having control over the Machine of Doom, uses the mechanical titan to destroy the transport portal, stopping Kaos before he can escape, and soon uses the Machine as a way to get out of the crumbling pyramid. Despite wanting to leave Kaos as he deserved to be left inside the pyramid in the very trap he tried to spring on the Skylanders, Spyro also knew what Master Eon would do, and saves Kaos from being buried alive. The Skylanders escape the pyramid as it collaspes into a pit, and the Machine of Doom broke apart as a result of the escape. The heroes land outside of the crumbled remains of the pyramid while Kaos made his escape unnoticed. Spyro, Gill Grunt, Eruptor, and Boomer were greeted by Master Eon, whom Spyro informs that he and the other Skylanders have underestimated Kaos, but the young dragon declares that he won't do it again. Spyro knows that this was only the beginning since Kaos would strike again and won't rest until he's destroyed the Core of Light, but next time the Skylanders would be ready. The heroes then celebrate their victory as Gill Grunt began to sing a song again, much to Eruptor's annoyance. 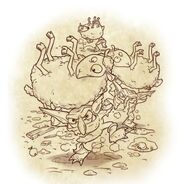 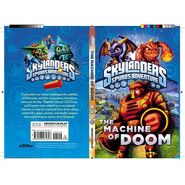 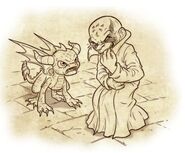 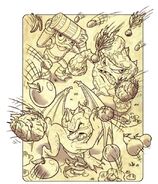 Spyro, Gill Grunt, and Eruptor being assaulted by flying veggies and fruit thrown by the invisible trolls
Add a photo to this gallery
Retrieved from "https://skylanders.fandom.com/wiki/The_Machine_of_Doom?oldid=17947"
Community content is available under CC-BY-SA unless otherwise noted.