The Golden Desert is one of the levels in Skylanders: Trap Team and Skylanders: Ring of Heroes. It is the territory of the Golden Queen, protected by her Undead guards and pet Chompy Worms that lurk in the sand dunes. It is said to be one of the hottest places in Skylands[1], and once was Grave Clobber's kingdom.

After Kaos' meddling with the Book of Dark Magic, part of the desert was dragged to the Shattered Islands, with the few ruins on it that survived giving way to sparse trees. Pretending to be part of Kaos' plan, Golden Queen reclaimed the isle to secure the Book of Dark Magic, only to reveal her plan to the Skylanders that she never intended to return it, passing it off to Dr. Krankcase for experiments before the heroes or Kaos could retrieve it. 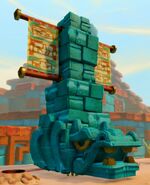 One of the various hippo statues, the base of which is used for the Lair of the Golden Queen's Legendary Treasure. 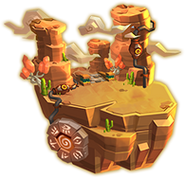 Area 1 in Ring of Heroes

Mission Menu in Ring of Heroes