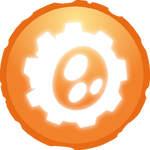 “Need a little fixin' up? We've got all the right tools.”
—Ring of Heroes Relationship Description

Tech is one of the ten elements introduced in the Skylanders series. When combined with the other Elements, it has the power to dominate the entire realm.[1] Orange is the main color for this element, though it is also commonly associated with silver and royal blue.

Also known as Green Primordial Goo, it is grease made from the fossilized Explodasaurs, and contains unimaginable power. Aside from powering the Golden Gear, it can also vastly improve technology that uses it, like the Trolls' weapons after they secured factories of it.

The Skylanders who possess the Tech element are associated with using advanced  or unusual techonology as their weapons. They have an advantage against Skylanders and enemies who wield the element of Magic, but are weak against Earth Skylanders in the Battle Arena, but in Ring of Heroes, they are weak to Life and Earth instead. When they form a bridge, they bring a platform of machinery towards them and tiles form onto the platform to make a bridge.

In Skylanders: Trap Team turret sections, Tech Skylanders have the ability Robot Rampage, which destroys most enemies in the area. In Kaos Doom Challenge, they can summon a machine gun that can be upgraded to have multiple barrels and giant rocket as additional support.

In Skylanders: SuperChargers, Tech-aligned Portal Master Powers include a protective barrier of gears, reducing enemies' armor, and gain a temporary Critical Hit chance boost. Those are distributed in several conditions, and the names are as follows:

Tech Imaginators can choose from four different abilities as their secondary attack:

Tech Spells in Battlecast mostly revolve around Gear and energy, but with attacking moves using several conditions for their best results.

The scrapped team spell for this element is the Mech of Tech, a giant mech suit that increases power and health to every Tech character on the team. 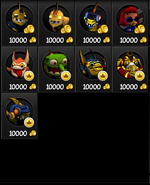 Retrieved from "https://skylanders.fandom.com/wiki/Tech?oldid=116516"
Community content is available under CC-BY-SA unless otherwise noted.