Swarm is a giant hymenopteran insect who is one of the eight Giants in Skylanders: Giants. He is of the Air element.

Swarm is as adventurous as he is unique. He always adds a barbeed insult to a stinging attack. He never gets caught short of ideas, always having a 'plan bee' up his sleeve.[1]

Swarm was once a prince from a proud race of mysterious insect warriors that had built their entire civilization inside a giant honeycombed pyramid. Growing up as one of the 9,000 members of the royal family, he was never permitted to leave the hive. But unlike his brethren, there was a magical quality to Swarm that caused him to grow much larger than the rest of his kind. No longer able to fit amongst the rest of his colony, the young prince broke the long standing tradition and stepped out into the open world - where his size and strength would be put to good use in the legendary battle between the Giants and the Arkeyans.

As one of the nine thousand members of an insect royal family all crammed together in a hive, it was difficult for Swarm to stand out. All that changed when, without any explanation, the young prince began to grow. And grow. And grow. Although it was forbidden for any member of the royal family to ever leave the hive, they were forced to make an exception for Swarm when his head starting growing through the roof.

Emerging into an unfamiliar world, Swarm struggled to find a place to fit in. He wandered for months, and discovered that stinging insects, particularly enormous talking monster stinging insects, are not very popular. He soon became homesick, and longed for the days he was being trampled by several thousands of his closet relatives. However, when he was discovered by the other Giants, he finally found a purpose - using his brute strength and stinger attacks to ruin the Arkeyans' picnic and restore peace to Skylands.[2]

When Malefor was on his way to attack the Skylanders Academy, Swarm was one of the many Skylanders that were summoned to stop the evil dragon. Tree Rex, Eye-Brawl and Crusher managed to grab hold of the Malefor's tail and hold him down, allowing Swarm and Bouncer to attack the dragon. However the Giants were caught off guard when Malefor's mechanical tail was also made as a weapon and he was able to defeat all of the attacking Skylanders, including the Giants, with a powerful tail whip. Malefor then proceeded to absorb their powers to make himself more powerful before advancing towards the Academy. Swarm's powers were later returned to him when Spyro destroyed Malefor's crystal that was used to steal the powers of Skylanders. 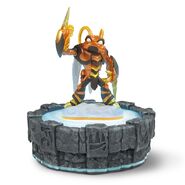 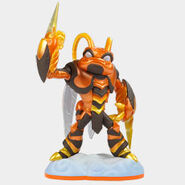 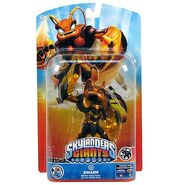 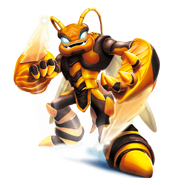 Swarm Transparent Render
Add a photo to this gallery

Retrieved from "https://skylanders.fandom.com/wiki/Swarm?oldid=117396"
Community content is available under CC-BY-SA unless otherwise noted.