In Skylanders: SuperChargers Racing, Super Shot Stealth Elf is mostly all-around in her stats. She has balanced Top Speed and Acceleration, as well as Firepower and Armour. Her best stat is her Handling, which is set to the maximum value for a driver.

As a SuperCharger, she has access to the vehicle mods.

As an AI racer, she uses the Tomb Buggy with the Ghastly Speedster mods for Land races, the Splatter Splasher with the Acrylic Spoiler mods for Sea races, and her Stealth Stinger with the SuperCharged mods for Sky races.

Focus on powerful ranged attacks with the Dagger Cannon!
Use deceitful tactics to disappear and attack enemies without them ever knowing what hit them! 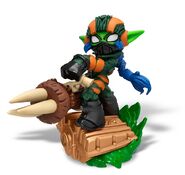 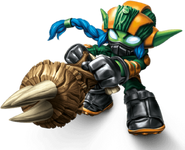 Retrieved from "https://skylanders.fandom.com/wiki/Super_Shot_Stealth_Elf?oldid=116122"
Community content is available under CC-BY-SA unless otherwise noted.