Stump Smash is an ent who is one of the main Skylanders in Skylanders: Spyro's Adventure. He is of the Life element.

Stump Smash is a tree greenish brown Ent whose face consists of an mouth with two wooden front teeth, a small nose, and yellow eyes with black pupils. He has two half branch ears and two toes on each foot. His hands are replace with mallet-like stumpfists used to crush his enemies.

Prior to being cut down and logged, Stump Smash was a peaceful tree creature who spent most of his lifetime sleeping in the forest areas of his world, that is, until his incident with the Trolls. To this day, Stump Smash is still grouchy about what happened to him and takes his anger out on evil doers. He knows how to bare a grudge. Even after all these years he still seeks out trolls to teach them a lesson. He's no sap.[1]

Stump Smash was once a magical tree that spent most of his time sleeping peacefully in the forests of Skylands. Then one day he awoke to discover his entire forest had been chopped down and logged by trolls– himself included. His long branches were gone, leaving him with only powerful mallets for hands, which he used to smash the troll tree-cutting machines. Although still grumpy about what happened to him, Stump Smash has vowed to protect Skylands against those who would do it harm… especially trolls.

Stump Smash was once a magical tree in an ancient glade of wonderous woodland. But one day, he awoke to a bark-bristling sight. Every tree, shrub and sapling around him had been cut down and hauled away. Holding up in his branches in horror, Stump Smash realized he too had been 'logged'. All that was left were two wooden stumps in the shape of mallets. With a resounding roar, Stump Smash uprooted himself and stomped toward the gaggle of lumberjack trolls responsible. He brought together his mallet hands, and WHACK! The terrified trolls ran screaming for their pointy-nosed googly-eyed lives. Even Master Eon heard the racket and set off to investigate. And, after learning Stump Smash's sad story, he brought him on board at once.[2]

Stump Smash was the Skylander who helped calm Spyro down when he was upset at Wiggleworth about Master Eon's capture by the traitorous Warrior Librarian Squirmgrub. When the Giggling Forest mysteriously started crying, Spyro assigned Stump Smash, Wrecking Ball, Countdown and Flameslinger to investigate. There, they discovered that the most of the giggling trees were turned to stone by a rampaging Bone Dragon, who was awakened by Kaos and his group of trolls. The Dragon then attacked Stump Smash, a half petrified Glumshanks and the other Skylanders, nearly turning them to stone as well. The stench of Wrecking Ball's belch was enough to drive the Bone Dragon off, and Stump Smash instructed Countdown to signal for help, which managed to reach Lightning Rod who was heading back from Fantasm Forest.

Back at the Eternal Archives, Spyro tricked Glumshanks into revealing where Master Eon and Kaos were held, he sent Stump Smash, Wrecking Ball, and Countdown to Troll Bastion to attack the fort and find Kaos and Eon. There, they fought against many trolls, eventually coming into contact with General Disaster and Wrecking Ball defeated him. The Skylanders found the petrified forms of Kaos and Master Eon, and overcome with anger, Stump Smash was about to smash Kaos' statue to pieces as retribution for Eon's petrification. He was then calmed down after remembering Spyro's words that Skylanders would never finish off nor leave behind their foes, and Stump Smash resolved to take the petrified Eon and Kaos to the Bone Dragon to unfreeze them. With the help of Wrecking Ball's gassy indigestion from eating General Disaster, the Skylanders were able to escape the Troll Bastion on Flynn's balloon.

Back in the Giggling Forest, Stump Smash, Wrecking Ball and Countdown discovered the other Skylanders had been petrified by the rampaging Bone Dragon. They were able to bring down the beast down to ground level and calm him down, and the Bone Dragon restored all those petrified. Kaos however, immediately began attacking the Skylanders upon being unpetrified, intending to capture the Bone Dragon for the Life segment to the Mask of Power. He was stopped and driven away by Master Eon and his spells, allowing the Skylanders to secure victory.

Stump Smash was one of the Skylanders who assembled on Eon's Island when Kaos arrived with The Darkness to destroy the Core of Light. The tree creature participated in the fight against the dark forces, chasing after a small group of Cyclops Choppers and smashing them down with his mallets. After dealing with the minor enemies, Stump Smash was suddenly struck from behind by an axe, and he turned around to find himself confronted by a large group of Cyclopses and Trolls. He realized that he was greatly outnumbered, but the tree creature was saved by the arrival of Trigger Happy. Working together, both Stump Smash and the gremlin gunslinger took out the horde of Cyclopses and Trolls, including two Goliath Drows individually.

However, when the Skylanders were winning the battle, Kaos unleashed his Hydra, who proceeded to destroy the Core of Light, banishing all the Skylanders from their world to Earth. Stump Smash, along with the other Skylanders, were turned into toys as a result of Earth having no magic. He waited for the new Portal Master to find him to help save Skylands.

Stump Smash, along with Spyro, Gill Grunt, Stealth Elf, and Eruptor, are still frozen as toys on Earth and were put in a toy display inside a toy store called Super Toy Planet. They were few of the Skylanders who witnessed Kaos breaking free of his statue-like form due to his power as a Portal Master. When Kaos noticed the frozen Skylanders and taunted them, Stump Smash angrily declared that if he could move, he would be 'dropping the hammer' on Kaos right there and then, to which the other Skylanders agreed. Afterwards, the present Skylanders could do nothing but watch as Kaos returned to Skylands with the use of a nearby Portal of Power.

Flameslinger is one of Stump Smash's closest friends.[3]

Despite having his branches chopped, Stump Smash can still attack his enemies by slamming them with his mallet-like hands. He also has the ability to spit and roll a large, spiked acorn upon his opponents, and can spit out smaller acorns at his opponent that will cause branches to grow on the enemy's body, slowing them down as a result. He can even regain health when in water. In 'Stump Smash crosses the Bone Dragon' it's shown that he can use his own life force energy to speed the growth of plants, as he used it on the acorns he spit out, which caused them to grow into large trees that tangled the Bone Dragon.

Gain a 20% Speed bonus while in the Radiant Isles. The scroll for this upgrade can be found in Stormseye. 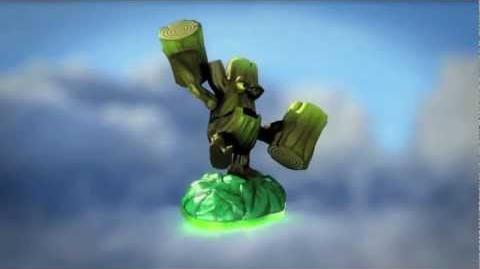 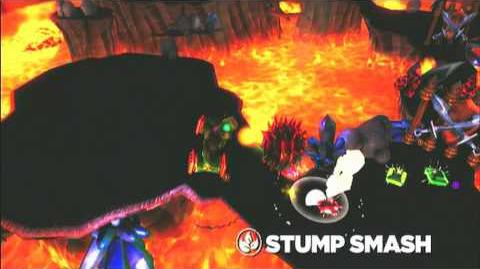 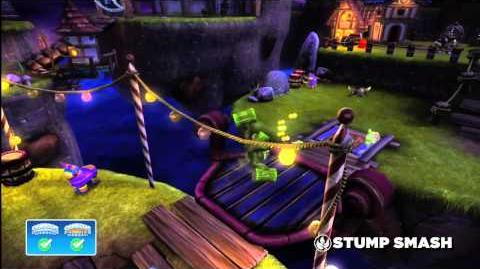