Stink Bomb is a martial arts ninja skunk who is one of the Life SWAP Force Skylanders in Skylanders: Swap Force. His Swap Force Ability is Sneak.

Resilient Stink Bomb didn't let his master's disappearance put him down. He developed the martial art Kung Fume and wandered Skylands teaching its whiffy ways. Like all Life Skylanders, Stink Bomb prefers to keep his feet on the ground.

Stink Bomb studied martial arts under one of the greatest ninja masters in history, who believed that surprise was the key to finding your true self. Thus, his master would constantly jump out and frighten him, hoping that it would scare Stink Bomb into finding his innermost strength. On one such occasion, Stink Bomb was so surprised that he instinctively released a cloud of vapor so pungent that it caused his master to disappear and never return. With this newly discovered ability, Stink Bomb developed his own form of martial arts known as Kung Fume, and wandered the land teaching it to all those who wished to learn. It was not long before the news (and smell) of this new form reached Master Eon, who sought out the young ninja at once.

Stink Bomb, Spyro and Ninjini were battling a group of Drow when Hugo called upon them to help Stealth Elf, Pop Fizz and Wash Buckler at Radiant Isles. Unfortunately they weren't able to assist as they were busy handling the Drow situation.

Being a skunk, Stink Bomb can really "light the fuse" on his enemies, releasing a cloud of smelly vapor which damages enemies and renders him invisible. He can also throw ninja stars and perform a devastating One-Inch Palm which knocks back and poisons his foes. With certain upgrades, he can launch nauseous acorns at enemies. Nauseated enemies turn green and take damage over a short period of time. 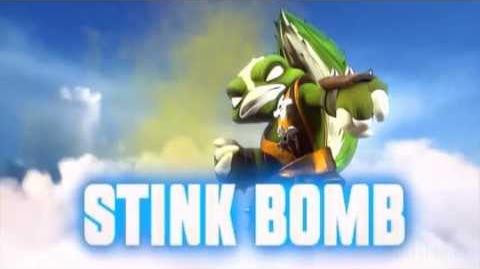