“A Shot in the Dark!”
—Starcast's official catchphrase

Starcast is a four-armed extraterrestrial who is one of the Dark Senseis in Skylanders: Imaginators. He trains Imaginators who belong to the Ninja Battle Class.

No one knows where Starcast came from, including Starcast himself! He was first seen falling out of the sky and landing directly on top of Master Eon, after he had made a wish for a Ninja Master to train the new generation of Skylanders. While it appeared that Eon’s wish had come true, it was later revealed that Pop Fizz had simultaneously made a wish to get out of anger management lessons with the old Portal Master. Therefore, it was impossible to determine if Starcast was the result of one wish or the other. But after a brief martial arts display, it was clear to all that the mysterious Starcast was a very skilled ninja warrior. And seeing as how Master Eon had to walk around in crutches for the next few weeks, it was also clear that anger management class would have to be postponed – so it was a win-win!

Starcast uses his inter-dimensional powers for the Ninja Class. Having four arms he is able to rapid fire shurikens from the Dark Dimension, this is later upgraded when he fires two more powerful shurikens at the end of a combo and drop dangerous shards whilst jumping. Starcast is also able to conjure a rideable Megastar which mows down any enemy in his path but can still take damage whilst riding - on the Megastar, Starcast can throw larger and explosive shurikens. If he comes under enemy attention, he is able to disappear and attack whilst summoning a decoy which distracts and attacks enemies. The decoy later causes a vortex before it disappears, drawing enemies together.

Depending on which path is chosen, Starcast can either upgrade the decoy or Megastar.

The path Megastart Me Up allows the Megastar to do a powerful, shockwave-inducing stomp and even jump off, keeping the Megastar for a longer duration which also shatters Starcast's shurikens into deadly shrapnel when hit.

The path Enhance The Decoy causes the decoy to release six homing missiles that target enemies. The decoy gains a high damage boost for its basic attacks and, whilst hidden and the decoy is active, Starcast has a higher critical hit chance.

When his Sky-Chi is unlocked, Starcast gains an orbit of shurikens which he is able to kick towards surrounding enemies and ends with a shockwave. His Soul Gem unlocks the ability to transform the Megastar into a flying starcer, able to fire dark torpedo cannons and damage any enemy that the starcer collides with. 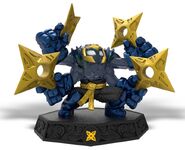 Retrieved from "https://skylanders.fandom.com/wiki/Starcast?oldid=114905"
Community content is available under CC-BY-SA unless otherwise noted.