The Kaos Trap
Return of the Dragon King

You can't pull the wool over this bewitching alien's eyes. She's most likely to send evil into orbit with her star fall blast.[1]

Looking for a way to magically banish the Skylanders, Kaos poured through every dusty scroll and ancient tome he could find. Upon stumbling across a rare and extremely powerful spell, he began to recite its words. However, he sneezed midway through the incantation. As a result, instead of sending the Skylanders far away, Star Strike was plucked from her home in the distant cosmos and brought into Skylands. Surprised, Kaos thought he’d won a powerful new ally in the mysterious and reserved Star Strike. But she knew evil when she saw it and promptly unleashed her fierce magical powers on him. Word of her victory over Kaos spread quickly and she was soon asked by Master Eon to join the Skylanders.

Star Strike was the first to answer Hugo's call to help the Skylanders at the Radiant Isles against an army of Trolls. Unfortunately, she, Tree Rex and Gill Grunt were busy evacuating the inhabitants of Stonetown from a crumbling dam before it gave out, and were unable to go and help Stealth Elf, Pop Fizz, and Wash Buckler.

When Malefor defeated most of the Skylanders that were summoned to protect the Skylanders Academy, Star Strike was one of the remaining heroes that served as the school's last line of defense. Despite assisting her fellow Skylanders in forming a barrier that held back Malefor's massive firebreath, they were ultimately defeated when the evil dragon delivered a devastating tail strike that broke through the Academy walls.

Use powerful shooting stars from the sky to damage enemies!
Use the power of the cosmos to reflect projectiles and stars at enemies! 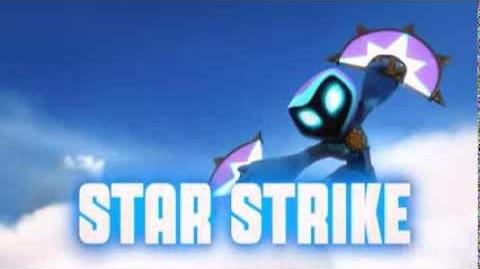 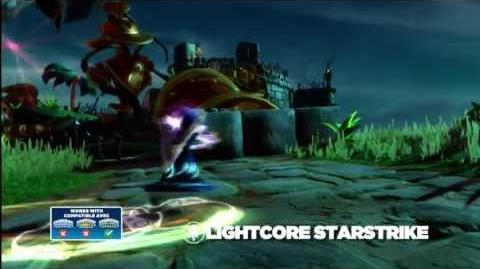