Spy Rise's torso is made of a purple metal that seem to reach to the back of his head.  His bottom half consists of four golden spider-like legs and purple hips.  His face is gold, he has green eyes with black pupils, and a protuding chin with a small goatee.  Spy's arms are black with purple and gold collars, he has four gold tipped fingers on each hand.  Spy Rise is also equipped with various spy gadgets, such as the green lensed spy goggles on his head and an unknown golden device on his back.

Spy Rise never gives up. The persistent P.I. sticks with a job until everything's wrapped up.[1]

From the moment he could crawl, Spy Rise wanted nothing more than to join his father in the family business as a private investigator. But after being hired by a shadowy figure to gather information on the Cloudbreak Islands, his father vanished, leaving Spy Rise alone to search for answers. He scoured the land for clues, using his immense skill in reconnaissance to track down his missing father, but all roads came up empty. Then one day, he received a tip from none other than Master Eon, which led him to a hidden lair near Mt. Cloudbreak, where he not only found his long lost father, but also uncovered an evil plot to take control of the magical volcano during the next eruption ceremony. With his father safe, Spy Rise decided to pursue a new career -- as a member of the Skylanders.

It was Spy Rise's intel that lured the villainous Captain Frightbeard to the Skylanders when they were treking a river on their way to the Wilikin Village. Spreading the rumor of a treasure onboard the ship, the result brought the evil seadog and his crew to the ship where the Skylanders launched an attack on the unsuspectig pirates. When Spyro was distracted by his weakened fire breath, Spy Rise saved his dragon companion from being swiped by Frightbeard's sword, allowing Wallop to deliver the finishing blow to Frightbeard. Afterwards the Skylanders wondered why Spyro's fire powers weren't working.

New web spinning gadgets will stop enemies in their tracks!
New pulse bombs increase the ability to deal with large groups of enemies! 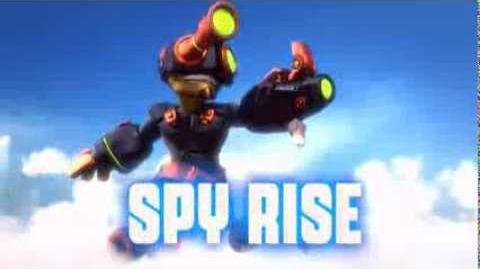 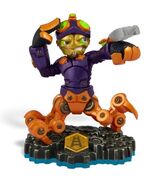 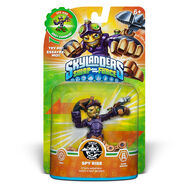 Spy Rise in a box

Retrieved from "https://skylanders.fandom.com/wiki/Spy_Rise?oldid=106269"
Community content is available under CC-BY-SA unless otherwise noted.