“The Fix Is In!”
—Sprocket's official catchphrase

Sprocket is a Goldling who is one of the Tech Skylanders in Skylanders: Giants. Her Series 2 counterpart is called Heavy Duty Sprocket.

Resourceful, Sprocket isn't one to sit back and let others do the work. She jumps in with both armored feet, creating solutions for every problem imaginable.[1]

Sprocket was raised with all the privileges of a rich, proper Goldling. But she cared little for fancy things. Instead, she spent most of her time growing up in her uncle's workshop, learning how to build and fix his many mechanical inventions. But everything changed on the day her uncle mysteriously vanished. When she eventually discovered that Kaos had been behind his disappearance, she constructed a battle suit and went after him, leaving the luxury and comfort of her family's wealth behind. From that moment on, Sprocket was dedicated to fighting the forces of evil, whilst never losing hope that she would reunite with her beloved uncle.

All Goldlings are fabulously wealthy, and Sprocket is no exception. Despite being raised by a rich family though, she has no interest in money or fancy things. Her real love is building and fixing machines, which she learned to do in her uncle's workshop. She would have been happy tinkering away for the rest of her life, had Kaos not carried out an uncle-napping when no one was looking. Determined to rescue her mentor, Sprocket built herself a high-tech battle suit, grabbed the biggest wrench she could find, and set off to crack some heads.

Although equipped with all sorts of gadgets and weapons, Sprocket has never managed to find her uncle. She'll never give up trying though, and whenever the forces of Darkness try to get in her way, they always end up regretting it. Smart, sassy and heavily armed, Sprocket is on a mission to fix evil once and for all.[2]

Sprocket uses both brains and brawn in battle. She can smack foes with her large wrench, and build machine gun turrets very quickly, that lock on to enemies automatically and shoot them. She can also deploy special mines that bounce in the air before exploding when enemies are near. She can even hop into her turrets which becomes a battle tank, where she can shoot enemies. In Terrafin battles the Boom Brothers, it is shown that she has a laser cutter in her battle suit which can easily cut through metal. Her skills in technology are far greater, as she was able to repair the escape pod on Trash Mountain very quickly.

Skylanders Giants - Meet the Skylanders - Sprocket (The Fix Is In) 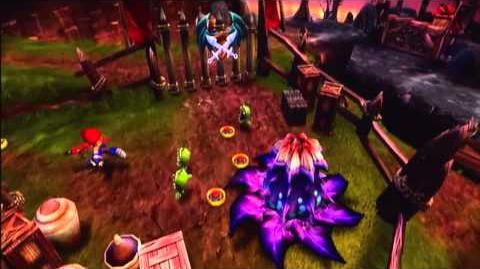 Skylanders Giants - Sprocket's Soul Gem Previw (The Fix is In) 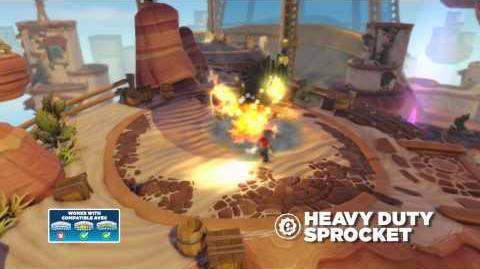 Sprocket, without her black googles 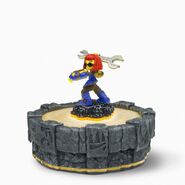 Sprocket on the Portal of Power 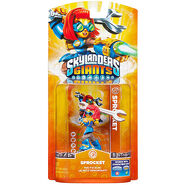 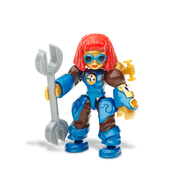 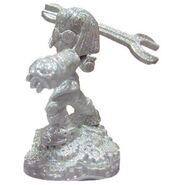 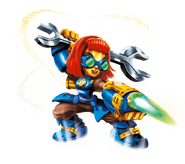 Sprocket Transparent Render
Add a photo to this gallery 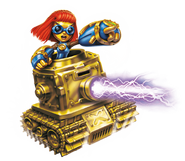 S2 Sprocket Transparent Render
Add a photo to this gallery

Retrieved from "https://skylanders.fandom.com/wiki/Sprocket?oldid=112212"
Community content is available under CC-BY-SA unless otherwise noted.