Splat is a pink faun who is one of the two Magic SuperChargers in Skylanders: SuperChargers. Her signature vehicle is the Splatter Splasher.

In her original adaption, Splat was darkness-based and she had no artistic attacks. Her staff was originally set as a tool to spread oil around, and she was known as Oil Pan[2]. During play testing, children were noting that her staff looked like a brush and they asked why her brush could only paint in one color. This lead to Vicarious Visions reimagining Splat that made her into a more bright and colorful character that resonated with kids even more.[3] 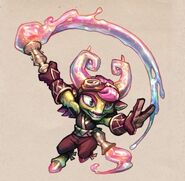 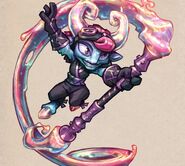 Although Splat was in boredom of doing repetitive work at school, she is still a colorful character and admires her various artwork. She also encourages others to break free of their comfort zones and express themselves with paintings. She also knows how to make an excellent impression on her peers. She is the definition of spunky; she's got a lot of fight in her and rarely backs down from a ruckus. Splat is also known to be quite brave when duty calls.[6]

Splat grew up in a typical faun village, which was perfectly manicured and orderly. Every day in school, she and her classmates would recite the same poems, play the same music, and paint the same picture – which was always a portrait of their great ancestor, Fluty Hoofdancer. But this didn’t suit Splat. The only art she wanted to learn was the art of war! After school, she would sneak off to the river and practice her own free form fighting technique against Chompies and other creatures that were causing trouble. When the elder fauns learned of this, they were outraged. But soon thereafter, a band of Drow attacked the village to steal their valuable art, and while the other fauns cowered in fear, Splat stood her ground. Unleashing her self-taught fighting style, she defended her village and sent the Drow running. Now as a member of the Skylanders, Splat makes quite the impression wherever she goes!

Splat can pummel enemies with her paintbrush staff as well as lob blobs of paint. She can also summon billy goat-like inklings to charge forward and leave pools of ink that damage her opponents.

These are the starting Statistics for this Skylander in Skylanders: Ring of Heroes. These can be modified in-game as the Skylander levels up and becomes stronger.

In Skylanders: SuperChargers Racing, Splat is an expert racer. She has maximum Acceleration for a driver and great Handling. She has also balanced Top Speed to go with her race stats. Her Armour is also really good, allowing her to take hits. However, she is let down by her low Firepower.

As a SuperCharger, she has access to the vehicle mods. When paired with her Splatter Splasher, she gains mostly large boosts to her Top Speed, Acceleration and Handling and minor boosts to her Firepower and Armour.

Her stats are noticeably similar to Spitfire's. However, while Spitfire has higher Firepower and less Armour, Splat has the opposite. Like Spitfire, she makes up for her OK Top Speed with her Splatter Splasher.

As an AI racer, she uses the Tomb Buggy with Ecto-Engine mods for Land races, the Sun Runner for Sky races, and her Splatter Splasher with SuperCharged mods for Sea races.

Create ink pools and more powerful ink creatures!
Brush up on your doodling skills to make your Inklings even more powerful.