The Spirit Dragster is Count Moneybone's signature Vehicle, unlocked by the Land Trophy. It is the opponent vehicle during the Boss Pursuit in The After Party, and during the Villain Race on the same track at the end of the Malevolent Tour. It attacks using a large machine gun hidden in its coffin and a bomb that releases ghosts fired from its exhaust. 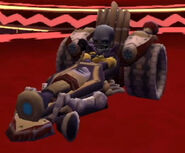 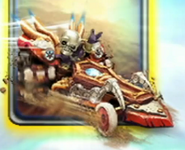 Spirit Dragster official artwork in Racing.
Add a photo to this gallery

Retrieved from "https://skylanders.fandom.com/wiki/Spirit_Dragster?oldid=119926"
Community content is available under CC-BY-SA unless otherwise noted.