“It's not the bite you shouldn't fear.”
—Description

Spiderlings are small spider enemies in Skylanders: Giants that normally attack in numbers and explode on contact. They replace Spider Swarmers and are as weak as Chompies. They will either pop out of Spider Spitters which will continually spawn them until destroyed, or a single group will spawn from a defeated Gargantula. Like Chompies, they can also be defeated by Giants by simply walking on them.

A Spiderlings is featured in the Boo! Undead Spell Card in Skylanders: Battlecast.

Spiderlings as seen in a Battlecast Spell Card. 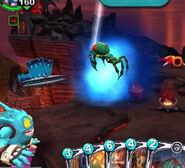 Boo! in effect.
Add a photo to this gallery

Retrieved from "https://skylanders.fandom.com/wiki/Spiderlings?oldid=103240"
Community content is available under CC-BY-SA unless otherwise noted.