Sonic Boom is a black griffin in Skylanders: Spyro's Adventure. She is part of the Air element.

Sonic Boom is described as the maternal individual of the Skylanders since she and her young are the only Skylanders who fight evil as a family. As protective as only a mother can be, maternal Sonic Boom shelters all who need help beneath her wings.[1] She also dislikes bullying. Sonic Boom can also be sensitive, as demonstrated in Terrafin Battles the Boom Brothers when she looked hurt after Terrafin yelled at the griffin in order to get through Sonic Boom's screeching.

Long ago, Sonic Boom took refuge high atop a mountain peak in the far reaches of Skylands, hoping to keep her griffin hatchlings safe. But despite her precautions, a devious wizard tracked her down and placed a wicked curse on the griffin eggs. Once hatched, the young hatchlings can live for only mere moments before they magically return to their shells... only to be hatched again in an endless cycle. Wanting to prevent such evil from happening to others, Sonic Boom joined the Skylanders and has trained her young to defend Skylands each time they are hatched.

When Sonic Boom chose the highest mountain peak to lay her eggs, little did she know that she was being watched by an evil wizard? Wearing a cloak of invisibility, the wizard made his way to Sonic Boom's nest, where he hoped to snatch a baby griffin feather for one of these wicked spells. Wizards live on a disgusting diet of liver and Brussels sprouts so, while Sonic Boom could not see an egg-thief, she could certainly smell one. She filled the sky with an ear-shattering shriek and the wizard stumbled backwards out of his cloak. But as he fell, the wizard put the young hatchlings under a cruel curse. Now, the babies can only break from their eggshells, for mere minutes before returning to one of their eggs, trapped in an endless cycle of rebirth. Sonic Boom and her hatchlings have used the curse to their advantage, however, and are now the first Skylanders to fight as a family. Their specialty is wiping out spout-stinking wizards.[2]

Sonic Boom and her hatchlings were enjoying a day-off at the Fantastic Fairy Fair with fellow Skylanders, Terrafin and Hot Dog. The griffin mother heard someone crying nearby and the trio of Skylanders came upon Rocky, a Rock Golem who was taken from his home by the fair's owner Professor Puck because of his magical singing voice that made everyone within earshot dance. After saving Gurglefin from a sticky cluster of cotton candy, the Skylanders attended Puck's circus show with Rocky being the star attraction due to his singing. Soon, the show was interrupted when a group of Trolls and the evil Floss-O-Tron 3000 trapped everyone, including the Skylanders, under a layer of sticky candyfloss, and kidnapped Rocky under orders of Kaos, believing him to be the Earth segment to the Mask of Power.

Thanks to Hot Dog's firepower, the Skylanders were able to free themselves and the crowd from the candyfloss. Both Sonic Boom and Hot Dog then assisted Terrafin and Sprocket in their battle against Kaos, the Trolls, and Floss-O-Tron 3000, saving the circus from a sticky explosion but were unable to rescue Rocky.

The Skylanders returned to the Eternal Archives after discovering a leftover clue that helped them learn about the Boom Brothers, a pair of robots responsible for making explosives. Figuring that that the Explosive Emporium is where Kaos had taken Rocky, Sonic Boom, Terrafin, Hot Dog, and Sprocket journeyed to Junk Mountain where the explosions factory laid. After getting past an aggressive Trash Ogre and the emporium's security, the Skylanders were able to sneak inside and find Rocky only to fall into a trap made by Kaos and the Boom Brothers. The evil Portal Master then forced the heroes to dance uncontrollably by throwing sticks of dynamite that contained Rocky's enchanted singing called disco dynamite. Terrafin quickly thought of a plan and instructed Sonic Boom to use her ear-piercing screech to drown the Boom Brother's disco dynamite and help stop the Skylanders from dancing. Thanks to this, the Skylanders were able to drive Kaos out of the room and sealed themselves inside the chamber, which turns out to be the inner section of a large rocket they were in.

Kaos then threatened to blow the Skylanders sky-high should they refuse to let him and his troll army back inside the rocket and turn over Rocky to them. Even worse, the Boom Brothers recovered from the attack and were holding Hot Dog hostage, also threatening the Skylanders to surrender otherwise the robots would detonate the whole room using a pineapple grenade. Sonic Boom, along with the other Skylanders, refused to give up but was surprised when Terrafin admitted defeat. This soon turned out to be a plan quickly conjured by Terrafin, who tricked the Boom Brothers into arguing with one another until one of the brothers forced the pineapple grenade down his sibling's throat, causing them both to explode and release Hot Dog.

With the danger of the Boom Brothers gone, there was still the threat of Kaos preparing to blow up the rocket they were in should they refuse to surrender Rocky. The Skylanders were able to escape, using the rocket to fly out of Junk Mountain and leaving Kaos and his troll army under what was left of the Explosive Emporium. Back at the Eternal Archive, the Skylanders discovered that the Earth segment wasn't Rocky, but his singing voice, which was given to him centuries ago by one of the Spell Punks who first split the Mask of Power. They soon accompanied Rocky back to the fair and attended his show, which turned out to be disastrous for Professor Puck when Rocky's true, terrible singing voice was heard. This caused the audience to turn against Puck as they paid him to hear Rocky sing his magical voice that he lost and proceeded to run Puck out of town, leaving the Skylanders and Rocky satisfied over their victory.

Sonic Boom was one of the Skylanders whose powers were stolen by Kaos with the use of the Mask of Power. She would later regain her screeching powers after the evil Portal Master was separated from the Mask of Power, and used her restored abilities, along with the other Skylanders, to destroy the Mask once and for all.

Sonic Boom has the ability to shoot sonic waves from her mouth at her enemies. She can also toss out her eggs and her hatchlings will emerge out of their eggshells to attack surrounding enemies and follow Sonic Boom around for a short while, and they can also grow over time, improving their damage output, and a later upgrade lets them develop wings to help their movement speed increase. After a while, they magically return to their eggshells due to the wizard's curse and must be released from their eggs again before repeating the attacking process. The babies also return to their eggshells when damaged enough, ready to be hatched again. Enemies will also try to target the babies as well, so Sonic Boom can use them to set them up for a roar attack.

With the Medea Griffin path, her babies become more powerful. Her first upgrade, Sunny Side Up, allows her to summon all three babies at once and also use the actual eggs to knock away opponents, making it easier for her roar to damage them. The second upgrade, Sibling Rivalry, allows her to summon a fourth baby, further increasing the possible damage output. Her final upgrade, Terrible Twos, has her babies hatch at their maximum strength, giving them the speed benefit in the beginning, as well as giving them a faster attack speed. In summary, this path makes her babies much effective at distracting or even defeating opponents, letting her deal with individual enemies more easily.

With the Siren Griffin path, her roar becomes more effective. Her first upgrade, Echolocation, creates a sound wave wherever a roar hits an enemy, damaging nearby opponents. Since she can move while roaring, she can create multiple shockwaves that can hit clustered enemies multiple times. Her second upgrade, Egg Shocker, has her create a shockwave that knocks opponents away if her roar hits an egg. Finally, her third upgrade, More Boom!, lets her charge up a massive sound wave that hits all around her for massive damage. In summary, this path increases Sonic Boom's crowd control ability; she not only gains a relatively quick attack that can clear opponents surrounding her, but her roar allows her defeat entire clusters of enemies more easily.

Her Wow Pow allows her hatchlings to merge into a larger, and more powerful griffin baby which can exist at the same time as the other babies if they are thrown out afterward, while her Soul Gem allows her to increase the damage output and range of her hatchlings. In Terrafin Battles the Boom Brothers, it is stated that Sonic Boom's roar is powerful enough to knock down trees and even dislodge mountains.

Gain a 20% Health bonus while in the Radiant Isles. The scroll for this upgrade can be found in Luminous Quarry. 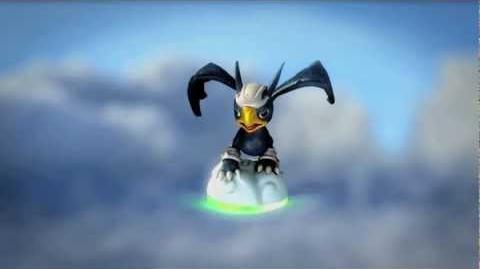 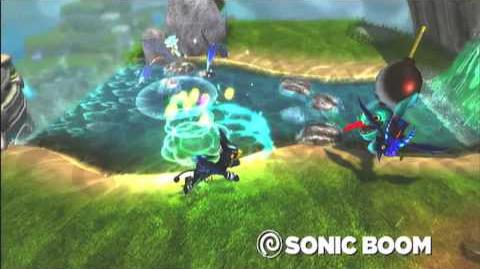