Snap Shot is a blue Water crocagator who is the leader of the Trap Team in Skylanders: Trap Team. He is available in the console Starter Pack along with Food Fight.

According to gameplay designer Nat Loh, Snap Shot was one of the most difficult Skylanders to design. Part of it was the challenge of trying to figure out what a Trap Master was but with traps and villains entering the picture, this was not a question Nat could answer as easily as he could with Tree Rex and the Giants. Everyone had an opinion on what it should mean to be a Trap Master and Nat did his very best to accommodate everyone's ideas so Snap Shot had been through a dozen different versions in the search for what a Trap Master would be. In the end, the efforts would directed towards the villains and what rewards the player got after capturing them rather than focusing on the act of catching them. Nat did some of his best scripting for these experiments including a lock-on strafing system that would figure out Snap Shot's actor heading relative to a target and perform animation blending between forward, right, back, and left walks. The upper torso would animate separately trying to rotate towards the target to certain thresholds before blending to a different walk direction. It was extremely complex and extremely satisfying when Nat got it all working.[1]

Snap Shot was originally green, with one of his protoype names being Croc Shot and his original catchphrase was "Quiver in Fear!".[2] His other prototype name was Bullseye.[3] 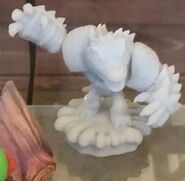 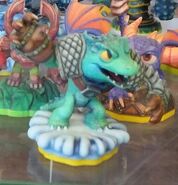 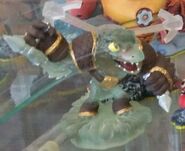 Snap Shot is a fearless crocagator who uses his wild tracking skills to hunt down evil monsters and eventually villains.

Snap Shot came from a long line of Crocagators that lived in the remote Swamplands, where he hunted chompies for sport. After rounding up every evil critter in his homeland, Snap Shot ventured out into the world to learn new techniques that he could use to track down more challenging monsters. He journeyed far and wide, perfecting his archery skills with the Elves and his hunting skills with the wolves. Soon he was the most revered monster hunter in Skylands – a reputation that caught the attention of Master Eon. It then wasn’t long before Snap Shot became the leader of the Trap Masters, a fearless team of Skylanders that mastered legendary weapons made of pure Traptanium. It was this elite team that tracked down and captured the most notorious villains Skylands had ever known!

When the Skylanders, Stealth Elf, Wash Buckler and Pop Fizz, were becoming overwhelmed by Kaos' Trolls and the threat of the Doom Raider Wolfgang, Master Eon called upon the Trap Masters to aid them. Responding quickly, Snap Shot and Wallop arrived at the Mabu mining expedition in time to assist the three Skylanders, with Snap Shot briefly stopping Wolfgang by shooting the werewolf in the back with a traptanium arrow. While Wallop dealt with the trolls, the crocagator Trap Master fought with Wolfgang, easily overpowering the werewolf by hurling him into the air and allowing Wallop to deliver the finishing blow to the villain.  After Wolfgang's defeat, the Skylanders hauled the werewolf back to Cloudcracker Prison.

The Mabu leader thanked the Skylanders and the Trap Masters for their successful efforts in protecting the Mabu and the Radiance Crystals. However they came to notice that the Fork of Infinite Resonance needed for the mining expedition was stolen by the trolls during the attack. Pondering, Snap Shot was left wondering what Kaos was up to.

Snap Shot and the other Trap Masters were hurled from Skylands when Kaos destroyed Cloudcracker Prison using his Frequency Modulator. This not only shattered the Traptanium stronghold, but also released the Doom Raiders and other villains from their imprisonment. The Trap Masters were sent to Earth along with pieces of Traptanium where they were found by the new Portal Master.

When Malefor was launching an attack on the Skylanders Academy, Snap Shot was one of the remaining Skylanders that attempted to protect the school. The Crocagator used his archery skills, along with his fellow Skylanders, to attack the approaching dragon. When Malefor evaded their arrows, the Skylanders formed a barrier that successfully withstood Malefor's flames, but the dragon was able to pierce through and defeat Snap Shot and the Skylanders with a single strike of his metallic tail.

Snap Shot was among the Skylanders that were stranded around Skylands when the Portal network was disconnected by Kaos's Sky Eater. Thanks to Mags' distress call through Magus' Omni-Disruptor, the Trap Master was able to hear that the Skylanders Academy was under attack and rushed to save it with the other Skylanders.

Snap Shot can use his Traptanium bow and arrow to shoot enemies in various ways and summon whirlpools. In Skylanders: Battlecast, he can also attack a hook to a special arrow to drag in enemies nearer. His special ability is Sharpshooter, which allows him to hit any enemy, and his signature Gear is the XL500 Scope, which attacks alongside his spells. He can also summon a trap Relic containing Chill Bill to temporarily assist him.