Smolderdash is one of the Core Skylanders in Skylanders: Swap Force. She is of the Fire element.

Smolderdash is as steely and determined as they come. She whips her enemies into shape, and doesn't take no for an answer.[2]

Smolderdash had always wanted to be a royal defender of the Fire Temple - home of the First Flame, a sacred torch that had been ignited by the original Fire Source. Unfortunately, she had been born during an eclipse and was believed by her people to be cursed, which prevented her from such an honor. But when Kaos stole the flame and used it to light the candles on his birthday cake, it was Smolderdash who went after it. Blazing like a comet, she dashed into Kaos' Lair, repelled the troll security force with her flaming whip, and retrieved the sacred flame just before Kaos blew out the candles. Smolderdash returned home as a champion of her people and was finally granted the honor of becoming a royal defender. But she graciously declined, having set a new goal for herself - to help fight against Kaos as a member of the Skylanders.

Smolderdash dreamed of becoming a defender of the Fire Temple and a protector of the First Flame that burned within. But there was a problem - since she was born during an eclipse, her people thought she was cursed, so they wouldn't let her. That all changed when Kaos stole the First Flame to light his birthday cake candles. Heroically, Smolderdash tracked him down and gave him a proper thrashing. Realizing then that she was destined to be more than a mere Fire Temple defender, she set off to join the Skylanders.[3]

Smolderdash was one of the Skylanders who attempted to fight the Bone Dragon, but was turned to stone during the struggle. She was later returned to normal along with the other present Skylanders.

Smolderdash, Trigger Happy and Food Fight were assigned to defeat a Water Viper that was attacking the Mabu Market. After their mission, they were called back to Eon's Citadel by Spyro to see Master Eon. The Magic segment to the Mask of Power was revealed to be hiding somewhere on Wool Mountain under the guise of a sheep, and Master Eon enlisted Smolderdash, Spyro, Trigger Happy and Food Fight to find it before Kaos does. Once they found and claimed the Segment, they returned to Eon's Citadel.

Create more powerful suns and hurl them at enemies!
Become infused with the power of the sun, bringing down the full might of a fiery star! 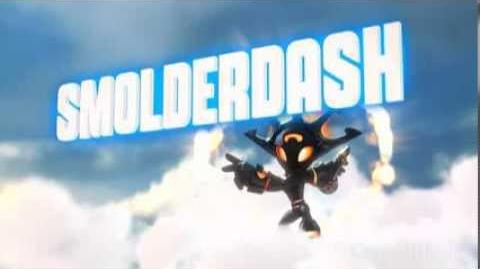 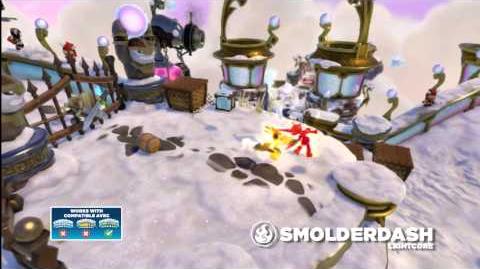