Slobber Tooth is a turtle dinosaur who is one of the new Earth Skylanders in Skylanders: Swap Force.

During development, Slobber Tooth originally was a two-headed dragon from the Magic element, and his name was a combination of the name of each head: "Slobber" for the right head and "Tooth" for the left head. Slobber and Tooth would soon pass to the Earth element, with a similar design to the final concept, and finally, each head and name are combined to Slobber Tooth.

Slobber Tooth is a gruff and headstrong fighter. Even though he was offered great power, he turned that down in order to follow his own path. He doesn't consider himself as a thinker to defeat Kaos's minions, but only uses his head, literally. If in doubt, Slobber Tooth will head-butt something. Or tail-thwap it. Or bite it. Or sometimes all three![1] He is also a ravenous eater.

Having been asleep for thousands of years, Slobber Tooth was awakened by the fiery eruption of two volcanic islands crashing together. Immediately sought out by Kaos to become one of his minions, Slobber Tooth was promised great power. But the gruff and headstrong fighter chose to follow his own path instead. For this, Kaos attacked his ancient petrified homeland. As the only one who could protect his hibernating race, Slobber Tooth fought tooth and tail against Kaos and his minions, ultimately driving them away. For his heroism, Master Eon asked Slobber Tooth to join the Skylanders, where he could continue defending Skylands against the evil Kaos.

An ancient earth beast, Slobber Tooth slumbered for thousands of years until he was awakened by two volcanic islands crashing into each other. The evil Portal Master Kaos sought him out and offered Slobber Tooth a place among his minions with the promise of great power. The turtle dinosaur rejected the offer, and in response, Kaos attacked Slobber Tooth's homeland that still housed the rest of his hibernating race. This caused Slobber Tooth to clobber Kaos and his minions into next week, his heroic deed earning him a place among the Skylanders.

Slobber Tooth took part in the desperate attempt to protect the Core of Light from Kaos, who absorbed the the powers of the Skylanders using the Mask of Power.

Slobber Tooth attacks his enemies with his armored head and slamming his spiked tail to create a shockwave. He can also bite his opponents with his slobbery mouth, even grab them and spit them out at other enemies. Further upgrades regarding Food Fighter path will allow Slobber Tooth to swallow enemies to recover health.

Slobber, eat and spit to take out enemies!
Use the might of a stone tail to channel powerful earth attacks! 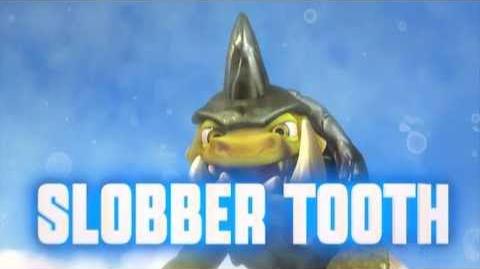 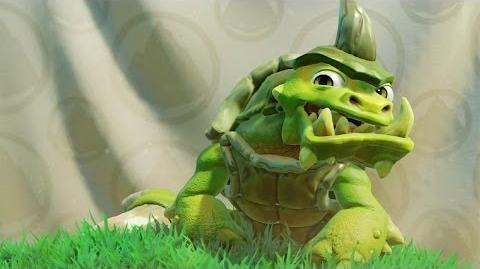