A Skyland is a Portal Master's home in Skylanders: Universe. Players were able to customize their own Skylands by changing its decoration - from trees, to pillars, fountains and totems - and space, and were able to defend it from enemies in various minigames such as Sky Defense and Castle Assault. Lairs were also positioned on the player's Skylands. The favorite plants of the Skylanders residing on it also grew at various set spots.

The size could be increased up to 8 times the more Skylanders there were in the player's collection. Different elements also unlocked different Elemental themes, which changed the look of the island, the effects, and its breakables. Though not tied to themes, Viking and Holiday themed decorations were also released.

Level 5 of a Skyland expansion.

Level 6 of a Skyland expansion, with the Water theme.

Level 8 of a Skyland expansion.

Various decorations for Skylands, including elemental and holiday ones. 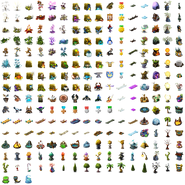 Icons for Skyland collectibles and decorations.
Add a photo to this gallery

Retrieved from "https://skylanders.fandom.com/wiki/Skylands_(Universe)?oldid=108023"
Community content is available under CC-BY-SA unless otherwise noted.