The Skylanders Micro Comics are a series of comic books by IDW Publishing. Several of these are alternate releases of issues from the main series of comics, while others are standalone releases focusing on only one or two Skylanders. Their main method of distribution is through Micro Comic Fun Packs.

These packs include a comic from The Kaos Trap arc with an alternate cover, a standee of the Skylander on the front cover, and a Villain poster. They were exclusive to Gamestop in North America.

These packs include a comic from the Champions arc with an alternate cover, a standee of the Skylander on the cover, a poster of the cover art featured on one of the previous three micro comics, as well as a Legendary Trap. They were exclusive to Toys'R'Us in North America.

These packs include a comic, a poster, and a Legendary Creation Crystal. They are exclusive to Toys'R'Us in North America.

The full artwork of the Trap Team Micro Comics covers/posters. 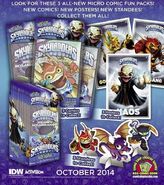 The contents of the Legendary Déjà Vu Pack.

The contents of the Legendary Blades Pack.

The contents of the Legendary Jawbreaker Pack.

The blind bag wrapping of the Micro Comic Collector Packs.

Retrieved from "https://skylanders.fandom.com/wiki/Skylanders_Micro_Comics?oldid=108052"
Community content is available under CC-BY-SA unless otherwise noted.