A young Master Eon founded the Skylanders Academy to train future protectors of the Skylands, sometime after the Great War and losses against villains much stronger than him. Though he started the construction on his own in a deserted island, he eventually started overseeing the beginning of each part of the facility with the help of other workers. The longer Eon's beard grew, the larger the Academy became.

The Academy is prominent in every episode of the show's first season, most appearances taking place in the Library. Though invasions and thefts are thwarted frequently, the school suffers a great attack in Assault on Skylander Academy, with various doors being destroyed by Kaos, Kaossandra and the Doom Raiders and its defenders incapacitated until the return of Team Spyro.

Though the Academy suffers no major invasions in Season 2, it is attacked in It Techs Two by Fisticuffs and Bomb Shell, as well as the malfunctioning Mechana-Trolls used by the Skylanders in training.

In Touch of Evil, the Academy becomes the meeting place of the heroes, both of evil and good, as they prepare for the threats of Strykore, Kaos and Malefor, unaware of Dark Spyro's creation.

The Academy successfully passed its yearly inspection in Weekend at Eon's, despite a disastrous performance. After Master Eon's sacrifice in Raiders of the Lost Arkus, Part 2, Kaossandra took over as Headmistress to continue his work.

The isle is made up of several smaller islands that can be connected and disconnected through unknown methods. Though most of its structure is stationary, some areas are permanently in orbit around it, and additional islands can be attached to its "port" at the Courtyard if necessary.

Though the school itself is one series of islands, the area around it is considered part of the campus, including the nearby town and Team Spyro Home, and all rules and safety regulations that apply in the school apply to these areas.

Creatures of Skylands can enroll in the Academy by taking part in admission tests that showcase their abilities, sometimes with the tutelage of graduated Skylanders. After it, the course takes four years of obligatory and elective classes, training and tests of skill and teamwork, and sometimes participating in missions with senior Skylanders. Like regular schools, students also have midterms and other major tests, and most live inside the campus at the dorms.

Should they pass the final test in the Skylander Games, the cadets are bound to The Book of Skylanders. Even if they do pass, Skylanders are still expected to attend certain classes and talks and give lectures; and cadets that fail the Games must take more years of the regular course until they are considered ready for the test again.

The Academy also offers a junior cadet course for students much younger than the usual, but the details are unknown. 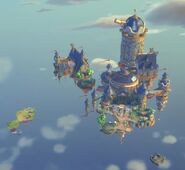 Bird's Eye view of the Academy.

Back view of the Academy

Retrieved from "https://skylanders.fandom.com/wiki/Skylanders_Academy_(SA)?oldid=123304"
Community content is available under CC-BY-SA unless otherwise noted.