The Skylanders are legendary heroes and champions, protectors of their world, Skylands, as well as the main playable characters in the Skylanders series. Using their powerful abilities, the Skylanders defended their world for generations, keeping peace and balance.

At one point, Kaos banished many of the Skylanders to Earth, while others arrived by different means. Far away from the magic of Skylands, they shrunk and turned into immobile figures, requiring a Portal of Power in order to return to Skylands and come back to life.

Recruited by Portal Masters or graduated from Skylanders Academy, a new Skylander's image is engraved onto The Book of Skylanders and is bound to it.

It was said that the Giants were the original Skylanders who banded together to fight an evil empire. Ten thousand years ago, the Giants battled against the tyrannical Arkeyans for the freedom of Skylands. In a final battle against the Arkeyans, the Giants were shot to Earth as a form of sacrifice, where they’ve been buried underground ever since. As the years passed, these enormous Skylanders were soon considered as a myth.

There has been hundreds of Skylanders in the past, and today, there are dozens, maintaining their role in protecting Skylands from the forces of darkness. Despite the fact that the Skylanders come from different realms and worlds, each knows it is their destiny to use their abilities to protect Skylands.

A hundred years ago, a group of Skylanders had protected the Cloudbreak Islands and its magical volcano that regenerates the magic in all of Skylands every one hundred years. During the peak of the previous eruption, an evil presence threatened the Ancient Elementals while they were performing the ritual that causes the volcano to erupt and spread the magic throughout the world. This sinister force summoned a swarm of Fire Vipers to attack the Elementals, but the team of Skylanders were able to defeat them in an epic battle. However, those Skylanders were caught in the eruption of the volcano and were banished to Earth, but not before the magical energies of the eruption granted them the ability to swap halves, thus turning them into a special team of Skylanders known as the SWAP Force.

The modern-day Skylanders were previously led by the veteran Portal Master, Master Eon, until The Darkness returned one day. Seeing the incoming threat, Eon called the Skylanders, including Spyro the Dragon, to prepare for battle as the evil Portal Master, Kaos, returned from his exile to once again attempt to destroy the Core of Light and rule Skylands as its emperor. By Eon's command, the Skylanders fought valiantly against Kaos's dark forces, but as they were winning the struggle, Kaos released his Hydra, who successfully destoyed the Core of Light in a devastating blast.

Shortly after the Core's destruction, the Skylanders who guarded it were banished from Skylands to Earth, where they were turned into toys as a result of Earth bearing no magic, and waited for a new Portal Master to find them. Although Master Eon survived the destruction of the Core of Light, he became a spirit and was unable to fight Kaos and The Darkness, leaving the duty of leading the Skylanders to the new, young Portal Master. After Master Eon recruited the new Portal Master, the Skylanders made their suprising return to Skylands, arriving on the Shattered Island to save its Mabu inhabitants from a freak tornado that was ravaging their village. The heroes then began their quest to save Skylands from Kaos' tyranny with the new Portal Master guiding them.

After Kaos's defeat in his lair, three of the Skylanders (Spyro, Gill Grunt, and Trigger Happy) returned to the Ruins with the captive Kaos, and Hugo later banished the evil Portal Master to Earth where he was shrunk and turned into a toy. However, Master Eon hinted to the new Portal Master that the journey with their Skylanders was only the beginning.

The Return of the Giants

The Skylanders are still trapped on Earth, frozen as toys. A few of them have been collected and placed inside displays of a toy store called Super Toy Planet where the toy form of Kaos was also housed in. However, Kaos broke free of his statue-like form due to his Portal Master status, and the frozen Skylanders inside a toy display nearby could do nothing but make idle threats to Kaos as the evil Portal Master taunted them before returning to Skylands with the use of a Portal of Power.

Meanwhile, the new Portal Master had recovered a Giant, and Master Eon sought them out in order to save Skylands once again from a new threat. The Skylanders, and the Giants, prevailed in stopping Kaos from ruling Skylands with an army of Arkeyan robots.

When a group of most notorious villains called the Doom Raiders terrorized Skylands without mercy, a group of Skylanders called the Trap Team were called forth to track down these evildoers and put to a stop to their plans. These Skylanders wielded legendary Traptanium weapons that allowed them to defeat the Doom Raiders and imprison them in the most impenetrable fortress called Cloudcracker Prison. Many years later however, Kaos destroyed the prison, which not only freed the villains, but also hurled the Trap Team far away from Skylands to Earth where they were found by the new Portal Masters. In the wake of the explosion of Cloudcracker Prison, the foundation of Skylands was fractured, unleashing two new elements: pure light and complete darkness.

Kaos used the power of The Darkness to create a large machine of destruction called The Sky Eater. This massive construct disconnected the portal network between Skylands and other worlds including Earth, at first preventing the Portal Master and their Skylanders from reaching Skylands. To combat this threat, a special team of Skylanders, known as the SuperChargers, was assembled. Piloting vehicles powered by the legendary Rift Engines, these Skylanders were able to travel through portals between Skylands and worlds beyond.

A Ring of Heroes

During a time of peace, Kaos uncovered the Book of Dark Magic, disrupting the rifts by accident this time and dragging the Earth Portal Masters into Skylands. Despite having no new groups to guide them towards their new mission, the Skylanders took the time to chase down both Kaos and the Doom Raiders, as well as helping the leaders they met in person for the first time to get used to the strange new realm in the Shattered Islands.

The Senseis are each masters of different fighting styles and secret battle techniques. For many years, it had been their mission to explore the furthest reaches of Skylands, searching for potential heroes to train in the fight against evil. However, with Kaos unleashing Mind Magic to create villainous Doomlanders, Master Eon has summoned the Senseis to return and lead a new generation of heroes into battle – the Imaginators.

The Imaginators are created by the imagination of Portal Masters, using elementally aligned Creation Crystals. After being born from a constellation representing a Battle Class, their appearances and abilities can be changed in numerous ways. Their powers are mainly determined by their class, with only a small selection of elemental abilities. Imaginators are exceptionally powerful against Doomlanders, and every Sensei helps them to grow even stronger.

In Skylanders Academy's canon, the Skylanders were founded entirely by Master Eon, who opened the Skylanders Academy after the terrible events of the Great War and the growing threats of powerful villains. In this continuity, the first few Skylanders are characters from several different groups of the game's story, including Ka-Boom, Snap Shot, Jet-Vac and Pop Fizz; even after decades they continue to protect the realm through heroic deeds and important jobs as professors or prison wardens. Over the years, many cadets have taken their courses, and those who are prepared enough to suceed in the Skylander Games are honored with their position on the Skylanders team, bound forever to The Book of Skylanders.

The current core team of the Skylanders is known as Team Spyro, being the primary group to answer to missions in nearby regions, both to defend others from evil acts, or offer a variety of services. The group is formed by newly graduated Skylanders, Spyro, Stealth Elf and Eruptor, and by veterans Jet-Vac and Pop Fizz.

As of Season 2, age has started catching up to many of the veteran Skylanders, many who have already retired or do so during the show's events. In Season 3, Master Eon's death would lead Kaossandra to take over as the Academy's headmaster, with the progress of the cadets left unknown.

Some Skylanders introduced or mentioned in Skylanders Academy are currently not playable in the games. It is unknown if some of them are still on the team. 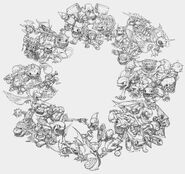 The 32 Skylanders in Skylanders: Spyro's Adventure
Add a photo to this gallery

Retrieved from "https://skylanders.fandom.com/wiki/Skylanders?oldid=113205"
Community content is available under CC-BY-SA unless otherwise noted.