Start a Wiki
Skylanders: The Beginning is a two-minute advertisement trailer based on the events of Skylanders: Spyro's Adventure that illustrates the backstory of the Skylanders and how they were brought into our world. It was developed by PandaPanther as a promo spot for the game with Activision as one of their close collaborators. It was first aired on Nickelodeon before being released publicly on the internet by Activision.

An extended version of the trailer, called the Director's Cut, was later released in the previews of the movie, Puss in Boots.

The trailer starts with Sunburn soaring high over an area in Skylands of remote, floating islands before flying off. Spyro and Gill Grunt are seen sitting together at the edge of one of the islands, as Spyro begins wondering on what he and his Gillman friend should do today. The purple dragon suggests swimming, going to the lava pits, or going fishing... but quickly dismissed the latter sugestion since it's weird because Gill Grunt's a fish. Noticing that Gill Grunt wasn't paying attention and was busy looking at something, Spyro hits the Gillman on the head with his paw, snapping him back to attention. Gill Grunt then pointed out sinister storm clouds that coming their way and asks if it was him or the clouds looked 'super evil'. Upon closer inspection of the evil storm clouds, it houses a flying fortress that was carrying an army of evil monsters, and a large, holographic head is seen laughing diabolically as the fortress approaches Skylands. Spyro recognizes the holographic head as Kaos.

Meanwhile, Trigger Happy is sniffing at the singed wool of a sheep he blasted, only to shudder in digust when he smelled something else, recognizing the scent that belongs to Kaos. Slam Bam, Boomer, Dino-Rang, and Chop Chop were having a card game until Slam Bam calls out Kaos' in shock, seeing the incoming storm clouds and bringing his friends to the attention of the approaching evil. Seeing the sinister clouds, Boomer quickly ended his side of the card game and ran away in a flash. Over in fiery area of Skylands, Eruptor watches as the storm clouds approach, accidentally burping out a glop of lava as soon as he uttered Kaos' name. Inside the flying fortress, Kaos' real form is seen laughing evilly while his holographic head is projecting his head, but suddenly begins coughing from laughing too long. He quickly pulls out a carton of apple juice and drinks it from a straw while looking around to make sure no one was looking.

As the evil storm clouds reached their side of Skylands, Spyro urges Gill Grunt that they have to get the other Skylanders together and they run towards the other side of the floating island. They enter a cave that contains a Portal and teleport themselves to the Core of Light, where some of the other Skylanders were waiting, while the rest were just arriving. As all of the heroes arrive, Spyro tells the Skylanders that Kaos has returned to destroy Skylands, as Kaos and his army of evil monsters were making their way towards the Core of Light. Trigger Happy and Slam Bam both groaned at the fact that Kaos is back again, with Terrafin growling that the evil tyrant owes him five dollars, itching for a fight. Spyro then rallies the Skylanders to teach Kaos a little lesson, and as they agree to fight Kaos once again for Skylands, the purple dragon flies skyward.

Reaching the height of his ascent, Spyro briefly overlooks approaching Kaos' army before flying through the skies. He is joined by Gill Grunt and Cynder, and they all avoid a large, flying molten rock that was hurled into the sky by Kaos' army. Looking back to where the molten rock soared, Spyro growls, 'Game on', starting the Skylanders' battle against the forces of evil as they charge into battle altogether. Spyro flies in over a group of enemies, breathing out a stream of flames on a portion of Kaos' army before landing on the ground, blasting fireballs wildly at the enemies around him. Stealth Elf and Wham-Shell are seen fighting alongside Spyro, attacking other surrounding enemies. One of Spyro's fireballs streaked across a portion of the evil minions, searing them and burning a Troll's beard in the process. Terrafin jumps in the air and bodyslams a Cyclops Chopper into the still lingering flames of Spyro's fireball, exclaiming that he is going belly-up and yelling out 'Boom!' to sound-effect his devastating blow on the Cyclops. Voodood and Chop Chop are seen fighting alongside Terrafin.

In another part of the battlefield, Slam Bam has all four of his hands filled with Cyclop Choppers, being aided by Gill Grunt and the Sun Dragon who are also attacking the other enemies around him. Slam Bam takes out two of the Cyclops Choppers he had in his grip before calling out to Stump Smash to 'Drop the Hammer' and throwing one of the Cyclops to Stump Smash. Nearby, Stump Smash responds to Slam Bam and catches the Cyclops Chopper by swinging his mallets into the Cyclops, including one that was thrown aside. Wrecking Ball is seen lunging and snacking on a feline enemy, while Boomer is throwing dynamite wildly into the air, lighting up the area with explosions. A long tongue wraps around a flying Cyclops Chopper as Trigger Happy enters the fray before tossing the Cyclops aside. The gunslinging gremlin, announcing his arrival, jumps up and kicks a Goliath Drow in the face before landing back on the ground.

As the Skylanders continued their battle against Kaos and his army, Zap is seen blasting away a group of Cyclopses from him with his electrical attack, looking around wildly for more enemies to fight. Zook fires a bazooka at a nearby group of enemies, but is attacked by a Cyclops Chopper. Eruptor is seen burping out a pool of lava on a charging Cyclops Chopper, burning it, before being attacked by another Cyclops. Suddenly, a Troll manages to grab hold of Gill Grunt's harpoon gun and takes it away from him, rendering the Gillman powerless as the Troll pushes him to the ground. A feline enemy approaches and prepares to kill the defenseless Gill Grunt with an axe, but Cynder arrives and saves her companion by taking the feline enemy away into the air.

Stealth Elf, Boomer, and Wham-Shell are soon greatly outnumbered by the large number of enemies around them, with Stealth Elf realizing that they were surrounded. Seeing that his enemies are overpowered, Kaos announced to the Skylanders that he shall defeat them before pressing a 'Defeat Skylanders' button to activate his machine. Spyro and Gill Grunt are pinned down by Kaos' minions, and as the machine charges up, the Skylanders look on in horror as Kaos fires a beam at the Core of Light, destroying it in a fiery blast. The destruction of the Core surged violently throughout the area, threatening to blast the heroes away.

The Skylanders struggle hang on to something, but the blast blows them all out of Skylands and into the void of space. They were drawn farther and farther away from Skylands, and suddenly, Spyro moans that he can't move before being frozen as a statue with a magic-elemental pedestal appearing at his feet. The other Skylanders around him also became frozen in place with pieces of the Core of Light forming into pedestals of their respective elements at their feet. They were entering the atmosphere of Earth, a planet far from the magic of Skylands. In an urban city, a human boy sees a purple streak of light soaring through the sky and it crashlands nearby. In a small crater, Spyro, having been knocked out, was turned into a small toy, and the boy cautiously reaches out for him...

Spyro regains consciousness and wonders where he is. He then notices that he was in the hands of the human boy, who was curiously looking at his toy form, and asks who he is. On a table nearby, the other Skylanders, who have also been found by the boy, were turned into toys as well. Gill Grunt and Trigger Happy notices Spyro awake and happily calls out to him. Spyro, happy to see his two friends, laughs at the sight of Gill Grunt and Trigger Happy looking like toys, with Trigger Happy claiming that this is not him at his best. Gill Grunt then points out that they got a Portal of Power, and Spyro realizes that the Portal can take them back to Skylands. The human boy then places Spyro on the Portal of Power, and in a flash of light, the purple dragon is transported into the game of Skylanders. As Spyro returns to his world, Gill Grunt cheers his purple friend on in his battle to save Skylands from the evil forces of Kaos with the human boy looking on...

Most of the Skylanders are seen in this trailer in plain view; others are seen as glimpses when some of the heroes are on the move.

Concept art of the fireball thrown at the Skylanders

Storyboard of one of the scenes in The Beginning trailer 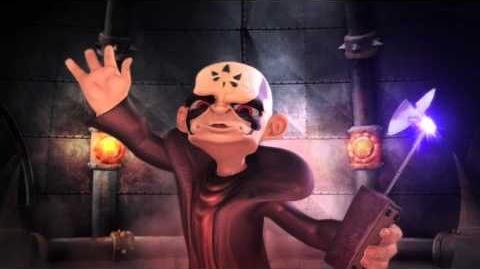 Skylanders Spyro's Adventure - The Beginning Trailer (Extended Version)
Add a photo to this gallery
Retrieved from "https://skylanders.fandom.com/wiki/Skylanders:_The_Beginning?oldid=120524"
Community content is available under CC-BY-SA unless otherwise noted.