Skylanders SWAP Force features 16 new inter-action figures with new powers and a fresh play pattern – dynamic swapability – that lets kids create more than 250 unique character combinations, giving them more choice than ever before over how they fight and move in the game. With each new addition to their Skylanders SWAP Force collection, Portal Masters unlock an exciting world of possibilities.

For the first time, Portal Masters can experience new dimensions of gameplay including the addition of jumping. And, seasoned fans can play Skylanders SWAP Force with their entire collection of characters from Skylanders Spyro’s Adventure and Skylanders Giants. Skylanders SWAP Force delivers a diverse and dynamic, story-driven gameplay experience, filled with adventure, combat, puzzles, mini games, and drop-in/drop-out co-op - all set within compelling environments.

Portal Masters will embark on a brand new adventure, encountering never-before-seen enemies and challenges, as well as meeting memorable non-playable characters who can help the Skylanders defeat Kaos and his minions in the Cloudbreak Islands.

Skylanders SWAP Force characters feature traversal abilities – such as flying, climbing, digging, bouncing, or teleporting – each of which can be explored in new areas of Skylands that are centered on these new play mechanics.

Swap Force actually started out as an original Vicarious Visions concept about how the developers could build on the greatness of Skylanders - playing together, building your collection, and the value of the collection. Also, what's fun from a toy standpoint: not just what's better on the video game side, but what makes for an interesting play pattern on the toy side? The toy design is actually led by Vicarious but I-Wei Huang, Character Director, and Paul Reiche III, Founder. have a close interaction on iterating with the designs and making them home in the Skylands.[4]

Less than a year after having two major projects cancelled, the team at Vicarious Visions didn’t quite know what they were going to do in the third main entry in the Skylanders franchise. “We knew that we wanted to do something that built off of that and added new magic to bring toys to life,” Vicarious Visions’ Jeremy Russo explained. "One idea we kept coming back to was mix and match. The idea of taking apart different characters and recombining them to create something unique."

The mix-and-match concept, later becoming Swap Force’s main gimmick, was in its infancy at that point. The team hadn’t figured out much of the gameplay or logistics yet. Still, when Activision’s executives visited, the idea was approved. Russo recalled that Activision CEO Eric Hirshberg even called it “magical.” From there, the studio was off to the races to make the magic come to life.

“We initially split it into two groups,” Russo detailed. “We had engineers figuring out how it would actually work.” The original engineer-created character was essentially a mound of clay with an audio jack connecting two parts. It was crude, but effective at laying the base for how magnets would later bring it to fruition.

“Separately, we had designers and artists focusing on the game concept, like what this would actually mean to the player,” Russo said. “That was a lot of fun, but it was all just theory at that point. We knew we had something magical but we just weren’t making that connection between the hardware and the software at that point.”

Then Engineer Brent Gibson made what later became known as the “Frankenlander.” He went home, took apart a bunch of Skylanders and made a three-piece creation (or maybe abomination) using Spyro’s head, Prism Break’s torso, and Voodood’s legs. A video created by Gibson in the wee hours of the morning circulated around some of the team leads, showing, with no audio, Gibson taking Spyro’s head, and thanks to the magic of magnets, attaching it to the torso and the legs with one hand. It was the eureka moment of the entire project. The proof of concept that the Swap Force concept could actually work. And it happened before the first Skylanders game even hit stores.

Gibson was then instructed to make a few more of these beasts so they could use them as the basis for the new characters. No longer using his own home as the workshop, he worked in the New York studio’s own facilities. While cutting Skylanders into pieces for the good of the Cloudbreak Islands, Gibson managed to slice his hand open. Blood pooling in his hand, he tried to cover it up, until someone discovered him and then lead him to a garbage to dump his handful of blood and after that, the hospital. Gnarly scar in hand, Gibson was one of the key catalysts driving Swap Force from theory to reality.[5]

Skylanders: Swap Force received mostly positive reviews. Venture Beat holds the game with the score of 90/100 and adds that 'while the inclusion of the jump button certainly makes for more varied gameplay, it also may add more challenge for the younger gamers in your household.'[6] Game Informer gave it a 8.50, saying that the game 'handles the empowerment of playing god convincingly'.[7] IGN gave Swap Force an 8.5, stating that the game 'delivers almost everything fans could want. There are fantastic new characters, a funny story, and a complete disregard for the boring rules that say robots and wizards shouldn't be part of the same world.'[8] 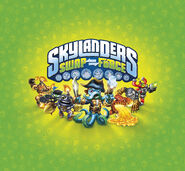 Magna Buckler
Add a photo to this gallery 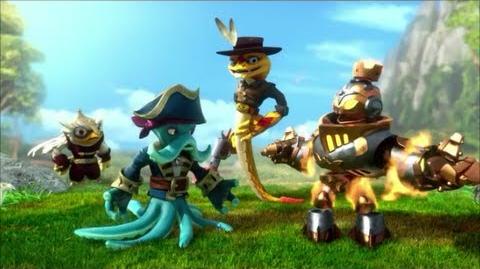 Retrieved from "https://skylanders.fandom.com/wiki/Skylanders:_Swap_Force?oldid=66603"
Community content is available under CC-BY-SA unless otherwise noted.