SuperChargers Racing includes all of the Skylanders and Vehicles added in the main game, with the exception of the six Instants and the E3 Hot Streak. In addition, Racing adds two exclusive digital vehicles given by Pandergast. 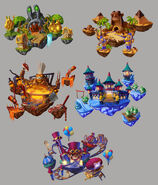 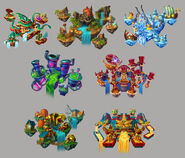 Art of all the Sea Tracks by SuperChargers Racing artist "Wavenwater" Michael Guimont. 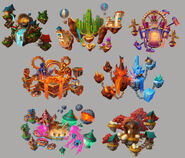 Art of all the Sky Tracks by SuperChargers Racing artist "Wavenwater" Michael Guimont.