Mobile
Skylanders: Ring of Heroes was a mobile role-playing game in the Skylanders series. It was developed by Com2Us of Summoners War fame, and like its predecessor, it was a turn-based RPG using a team of various Skylanders facing against other known enemies from the series.

The revamp of Ring of Heroes was released on December 3rd, 2020[4], changing various mechanics, dialogue and forcing all players to start over. Over a year later on December 29th, 2021, Com2Us announced that Ring of Heroes would cease services on February 28th, 2022, KST.[5]

Skylanders Ring of Heroes features a story where players assume the role of a Portal Master. Having actually landed in Skylands for the first time ever, they will need to go after Kaos who has disrupted time and space using the Book of Dark Magic. Players are able to customize their Portal Master, embark on various PVE and PVP adventures throughout Skylands, and collect and raise Skylanders to battle against countless villains. Players will also be able to Evolve and Awaken Skylanders to increase their stats, and gain new skills. All Skylanders are separated into 10 different elements. The semi-turn-based battle system allows players to plan their combat strategically through elemental synergies, elemental weaknesses and strengths, and unique Skylanders’ skills. In addition, players are able to trap Companion Villains and bring them along to fight side by side with the Skylanders against Kaos and the Doom Raiders.

Reassemble the Squad. Master your Skills. Awaken your Champion.

The ALL-NEW Skylanders mobile turn based RPG is finally here. Join Spyro, Stealth Elf, and many more of your favorite Skylanders in this epic adventure of Skylanders: Ring of Heroes.

The mobile role-playing game (RPG) developed by Com2uS is based on the Skylanders™ franchise from Activision. The game features an epic tale with over 80 different characters. Players will be able to use these characters of different elements and make use of their skill combinations to engage in exciting strategic battles.

Watch the Skylands come to life

On February 20th 2020, it was announced that the game will be rebooted.[6] On July 7th 2020, the Com2Us company announced that this revamp will include the removal of Soul Stones, add new content updates and an update to the runes.[7] The reboot was later released on December 3rd.

After many skirmishes between villains and Skylanders, Skylands appeared to have entered a rare time of peace. However, it didn't last when Kaos discovered the vault holding the Book of Dark Magic and attempted to use its power to gain control over every Portal at once. Instead, his spell backfired, and instead blocked off the Portals and once again spread unstable Rifts, with new realms shattered and brought over - including parts of Earth, dragging the Earth Portal Master into Skylands.

Their rift dropped them in the middle of a friendly skirmish between Awakened Skylanders in the arena, right after Kaos attempted to strike and destroyed the area. Aroused by Awakened Whirlwind, the Portal Master directed the Skylanders to fight back, causing Kaos to run away with Glumshanks not far behind; and without noticing, Kaos lost the Book of Dark Magic in his escape.

With the immediate threat resolved, the Portal Master was guided to Sky Island, where Master Eon introduced them in person to Hugo, Cali and Flynn, who agreed to help them find the Book before it caused more destruction, and discover a way to return the human home. With the unstable Portals lingering about, they couldn't go directly to Kaos's lair, and had to instead venture through each of the Shattered Islands to take short trips between them safely, fighting off villains with summoned Skylanders.

In the Singing Forest, they discovered Chompy Mage scheming something, but the wizard refused to explain why he was working for Kaos despite the conflict between him and the Doom Raiders, and escaped. Suspicious, the group proceeded to the Misty Bog, briefly losing track of Hot Dog, and fought The Gulper, but were unable to get anything out of the clueless Doom Raider and continued to Infernal Volcano.

There, once Chef Pepper Jack and his spicy concoctions were defeated, he informed them that the Doom Raiders would harness dark power in trade for Eruptor taste testing his food, giving away to the heroes that they found Kaos' lost Book of Dark Magic and intended to use it to alter reality as they saw fit. With Master Eon's guidance of their next target, Dreamcatcher, the group proceeded to the Highland of Mirrors and fought off her attempts to break their will, but were too late since Dreamcatcher had already passed the Book of Dark Magic to her leader in The Golden Desert.

Taking the portal to the Desert themselves, Cali was initially taken aback by the memory of being turned into gold in the same place by the Golden Queen, but they continued on regardless knowing that they would have an advantage getting to her before Kaos. Despite the Golden Queen's malicious taunts, they defeated her, only to discover that she passed the Book once again on to Dr. Krankcase so he would amplify its powers. With more haste as his experiments could cause more trouble than controlled destruction, the group went off to the Abandoned Factory. Meanwhile, Kaos and Glumshanks left their lair to rendezvous with someone in the Rainbow Valley, still believing the Doom Raiders to be guarding the portals between the islands and that the Book's location was still unknown.

Though the group reached Dr. Krankcase while his experiments were still unsucessful, he used their battle to set off Hat Bots with the book to a safer lab, but unable to pursue him because of his green goo attacks, they had to cut their losses and go to the portal to Rainbow Valley. There, unknown to the heroes, Kaos recruited Pain-Yatta on behalf of the Doom Raiders with the promise of more candy and becoming a high ranking member. Eager to get his rewards but enraged by Blackout and Spotlight's attempts at pity, he absorbed leftover dark magic from the power to fight, but when defeated, he realized that he was tricked into stopping them and turned himself in. Relieved that one of their enemies changed sides, they took his advice to search for Wolfgang in the Bone Grave Village.

Before getting there, however, the Portal Master was approached by Enigma, a sorcerous Skylander who wasn't as willing as the others to fight along them. After watching them fight with certain requirements, he was slightly more amicable, and guided them on various missions, though hesitant to join in and instead keeping an eye on trouble happening on other parts of the Shattered Islands. With the Skylanders and their allies enroaching on Wolfgang, the werewolf revealed that he knew of their arrival for some time, fighting them off with his new song of pain. But the book was lost yet again in the scuffle, with Nightshade taking it and taunting the heroes before taking his leave. Following him into the Mansion of Gloom, even Stealth Elf and Jet-Vac were angered by his attitude, yet they continued further into the dangerous building.

When they found the thief, Nightshade presented to them the Book of Dark Magic, defying the Doom Raiders to forever display it in his mansion as proof of his skill. However he was perfectly willing to fight the Skylanders for the artifact. However, the thief wasn't as honest as their previous battle, and revealed the Book on display was a fake and the real one had been sent to Luminous as the last line of defense. Though the Dark Doom Raider was defeated, Master Eon was quick to make the heroes aware that his Light counterpart was irrational and angry because of his pursuit to eradicate darkness, and they entered the final portal - to the Shrine of Light.

In the depths of the shrine, they confronted Luminous, who could only rant about how the darkness was to blame for his previous defeat; a far cry from Trap Team. He planned to use the Book of Dark Magic to extinguish it from the world, and later he would destroy the artifact as well. Defeating him regardless of his powerful assault, Luminous cursed the book once again and tried to take out his frustration with it, only for Kaos to swoop in and snatch the Book at last

With a taunt, Kaos readied a spell to destroy the heroes, but the Earth Portal Master took a stand to protect Hugo, Cali and Flynn. Kaos stopped to mock the other sorcerer's attempts to fight back, but this gave the player enough time to summon Stealth Elf, Spyro and Barbella at point blank. Spyro promptly snagged the Book of Dark Magic from Kaos and Barbella threw the evil Portal Master and Glumshanks off the island. With Skylands at last safe from both Kaos and the Doom Raiders, Master Eon used the book to restore the rifts and send the Earth Portal Master back home, but not before saying goodbye to their emotional companions who helped them along the way. With the Portal network restored, the Earth Portal Master had the chance to return to Skylands at their own free will. After all, the Shattered Islands were still around, and Kaos was still at large, most likely plotting.

A banner for Skylanders: Ring of Heroes. (Notice that Deep Dive Gill Grunt makes an appearance despite not being in the game) 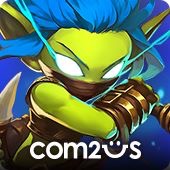 An old icon for the app. 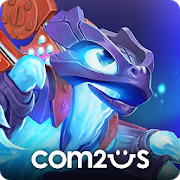 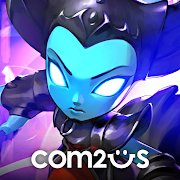 Promotional art for Ring of Heroes 2.0