Skylanders: Imaginators is the sixth and latest console installment in the main Skylanders series.

The story of Skylanders Imaginators takes place long ago when the Ancients used a mysterious power known as Mind Magic to create everything in Skylands. With it, they conjured into existence anything that they could imagine. However, they soon learned that in the wrong hands, it could be very dangerous, and so they sealed it away so that it could never be misused. After discovering this ancient secret, the evil Portal Master Kaos has unleashed the power of Mind Magic into Skylands once again - and he is using it to create an unstoppable army of Doomlanders, the likes of which have never been seen! Now it's up to Portal Masters and, to help train them, the greatest mystic warriors of all time - the Senseis, to create Skylanders Imaginators from their own imagination to stop Kaos and his Doomlanders before it is too late.

Skylanders: Imaginators supports the 300+ character toys from all the previous Skylanders games that fans can enjoy in the real world and in the virtual game world. When players add new Skylanders to their collection, they expand their in-game experiences.

Create your own Skylander

For the first time ever, their imaginations come to life as they can create their own Skylanders, called Imaginators. With endless creation options of powers, abilities, catchphrases, appearance and much more, fans can build their very own creations out of their imaginations, or use the randomize feature to allow the game to choose parts for them.

The Skylanders franchise continues to offer engaging characters that kids love to discover as they play the game. Skylanders: Imaginators introduces new guest stars to Skylanders called Senseis to fans. Senseis include 20 new characters and 11 former villains. Each Sensei is a master of one of 10 powerful Battle Classes (e.g. Knight, Sorcerer, Brawler, and more).

Being the master of these Battle Classes, only Senseis have the ability to unleash Sky-Chi - the ultimate Battle Class super move. Sensei Skylanders have a master-to-apprentice relationship with newly created Imaginator Skylanders. This is supported in-game through the Sensei's unlocking of unique Imaginator weapons, the increase of Imaginator level caps, providing access to special areas in the game, as well as the unlocking of new Secret Techniques for Imaginators of the same class.

Skylanders: Imaginators features an all-new adventure-filled, comedic and charming story with fun new characters, as well as returning franchise favorites. The game delivers a diverse and dynamic story-driven gameplay experience, focused on the magic of sparking imagination, inspiration, and excitement of fans as they create their own superheroes - all set within a variety of compelling new environments. Additionally, Skylanders Imaginators supports local co-op multiplayer. Players can place two Creation Crystals or two toys or a combination of the Crystals and toys on the Portal of Power to maximize the fun!

Skylanders Imaginators also features fan-favorite characters who make an appearance in both the storyline of the game - and the Skylanders Academy television series! These characters include Spyro, Stealth Elf, Eruptor, and Jet-Vac.

Development of Skylanders: Imaginators began after the completion of Skylanders: Trap Team, and the game's development cycle is approximately two years. With SuperChargers not being a commercial success,[1] and Disney's decision to shut down its own toys-to-life developer Avalanche Software and its game, Disney Infinity, Activision, which had grossed $3 billion with the franchise, remained hopeful and believed that the genre still has potential for continuous game development.[2] Despite their positivity, following the underperforming sales of SuperChargers, Activision informed Toys For Bob if this new Skylanders game title didn't make more money, it may be the last one in the series. Toys For Bob knew there was a chance Imaginators would be the last Skylanders game, so they intentionally wanted to leave the audience with a create your character gimmick.[3]

As the game's target audience is kids, many development team members suggested ideas to their own children to see whether they resonate with them, and pitched these ideas to other members to see whether their children are equally interested in order to ensure that these gameplay ideas appeal to them.[4] According to Jeff Poffenbarger, the senior executive producer of Imaginators, innovation is one of the most important aspects while designing the game. They hoped that with new mechanics and systems, they can continue to attract new customers to play the game, as well as retaining the core players. In addition, according to CEO Eric Hirshberg, one of the advantages is that Skylanders, unlike its competitors, features largely original characters and would not be confined to any limitation. The Imaginators mechanic was the most significant introduction, and was designed to be similar to other complex role-playing games.

However, one of the key principles is to retain its accessibility. They hoped that players can make use of their creativity to create unique Skylanders, and that the team "can't wait to see what people create". This mechanic was inspired by a fan letter after the release of Skylanders: Spyro's Adventure. Selected player-created Imaginators have been printed out through 3D printers by the Skylanders team.[5] As this creation mechanic introduced lots of new characters, the team decided to create a story that puts a huge emphasis on existing characters, so that these characters would remain relevant to the franchise.[6] Toys For Bob was uncomfortable with the inclusion of microtransactions, with not enough content being added in due to time constraints and the story writers couldn't tell the game story and experience that they wanted.[3] According to former Toys For Bob Narrative Lead Alex Ness, Skylanders: Imaginators was the most difficult storyline he had done due to the different toolset for the game and the company spending more time on modeling and imagination time on the Imaginators.[7]

At E3 2016, Sony and Activision announced that Crash Bandicoot would be a guest character in the game. To create an accurate version of Crash, Vicarious Visions studied old documents of the old games, including the original concepts. As Crash has his own physical figure, the team went through multiple design iterations to ensure that they had successfully captured its personality, and that its final pose and appearance are cohesive with his old version. The team began animating Crash after finishing up the model, with the goal of ensuring that Crash's "edginess, trademark wackiness, and swagger" are preserved. To capture Crash's legacy, the team specifically created a new life system, spin attack mechanic for it, and numerous crates for its level.[8]

Imaginators marked the first major appearance of Crash in several years; though he had a cameo appearance in Uncharted 4: A Thief's End, the last game in which he was the main character was 2010's Crash Bandicoot Nitro Kart 2.[9] In August 2016, at Gamescom, it was announced the game would also feature Crash Bandicoot series antagonist Doctor Neo Cortex as a playable character, along with an additional level featuring gameplay and design elements derived from the Crash series.

Skylanders Imaginators received positive reviews, averaging an 81 Metascore for the PlayStation 4 version[10], a 77 Metascore for the Wii U version, [11] and a 78 metascore for the Xbox One version[12]. The Switch port received a 74 Metascore.[13] While the game was praised for its 'create your character' gimmick, negative reception included the game's short length and rushed storyline, reussed assets, with some fans regarding Imaginators as the worst game in the series.

The game reportedly sold 66,000 units in the US during its first month[14], and due to selling less than SuperChargers, this prompted Activision to put the main franchise on hiatus.

Early versions of the Skylanders: Imaginators logo by Krizia 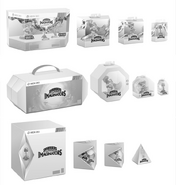 Regular Starter Pack and its contents.

The Crash Edition Starter Pack and its contents.

Special Portal Owners Pack, only including the game and the standard Fire Creation Crystal.