The starter pack comes with Series 2 Cynder, Jet-Vac, and two exclusive figures; Royal Double Trouble and Platinum Treasure Chest. A Series 2 Double Trouble with a Series 1 pose can also be found in place of his Royal counterpart in several starter packs. The starter pack also comes with a special Portal of Power with built-in bluetooth connectivity, which allows it to also be used for other mobile spin-offs such as Skylanders: Cloud Patrol and Skylanders: Lost Islands. It can also be used as a standard portal for the console games by connecting it through USB connection.

The starter pack costs $49.99 and came with a download code of Skylanders: Battlegrounds, although the code was only for Apple devices; it could also be bought without the starter pack for $6.99 on the App Store and Google Play.

In 2016, Battlegrounds has since been removed from the App Store.

Bring the Skylanders to life in two ways:

To fight an enemy, the player must step on the same tile as them. Then two of their Skylanders will be transported to a battleground. The battleground they are sent to is determined by the type of tile the player and the enemy stepped on. Several waves of enemies will appear and attack the players Skylanders. Players must fight using the Skylanders by tapping the Skylander and sliding their finger to where they want them to move. If the player slides their finger towards an enemy, the Skylander will attack the enemy. Players can also use special abilities and magic items. Winning battles will earn players coins and experience points. Players might also get gems and magic items.

After the player completes a task in the Skylands, a portal will appear. Moving onto the same tile as the portal will end the level and automatically send the player to the next one.

To see the collection of Skylanders, items, and other related material, go here.

The current logo for Skylanders Battlegrounds 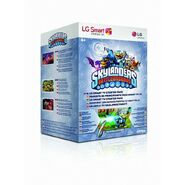